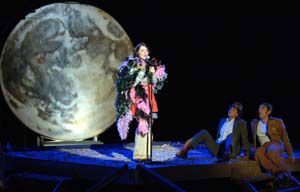 As you like it? Try loving it! Shakespeare’s romantic romp through the Forest of Arden can be an exercise in foolishness in the wrong hands but, in Jonathon Moscone’s splendid production for California Shakespeare Festival in Orinda, it glows with the passion of first love, bites with an incisive wit and foreshadows the feminist movement by several hundred years. Performed by a fine cast, designed with a sharp eye and abetted by foot stompin’ Balkan gypsy music by the busy Gina Leishman, who also scored Berkeley Rep’s current ‘Mother Courage,’ it can turn the most apathetic into a fervent fan of the Bard.

The luminous Susannah Schulman lights almost every scene with a special glow as Rosalind, the usurper Duke’s niece who is banished, as was her father. But Rosalind does not go quietly into the good night. She takes with her the Duke’s daughter, Celia (Julie Eccles) and his court fool (Dan Hiatt) for company, a full set of Louis Vuitton luggage and a teddy bear. This is only one of the clever touches in this production. Another is a hilarious sight gag that involves the audience – and no more will be revealed here. Still another sums up Rosalind’s character at the very end, thanks to Katherine Roth’s more-than-inventive costume design. Rosalind, who has been masquerading as a boy for most of the play, shows up for her wedding to her beloved Orlando (Stephen Barker Turner), wearing a frothy white skirt, held up with suspenders, over a white tee-shirt. On her head is a gentleman’s top hat, decorated with white tulle. The outfit is wonderfully androgynous, as befits the character’s disposition.

Cal Shakes’ finest Shakespearean, L. Peter Callendar, takes the dual role of the usurper Duke and his brother, the banished Duke, a kind of good-cop, bad-cop setup, changing like quicksilver from one to another with a scowl or a smile and a pair of glasses whipped on and off. Also doubling – and tripling — is Bay Area favorite James Carpenter as Orlando’s faithful old servant, a drunken cleric and a lovesick rustic. Andy Murray is the melancholy Jacques, his ‘All the world’s a stage’ a highlight of the show. A competent ensemble of lesser characters, singers, dancers and musicians Dan Cantrell, Lila Sklar and Djordje Stijepovic round out the cast.

Kris Stone’s set design is studded with apples in the first act, dried leaves in the second; trees hang with Orlando’s love poems and a full is moon beaming down on it all. As the real moon beams down on the spectators who are seated in no less magical venue than the stage forest. It is a perfect marriage of site and story ‘with sermons in stones and good in every thing.’