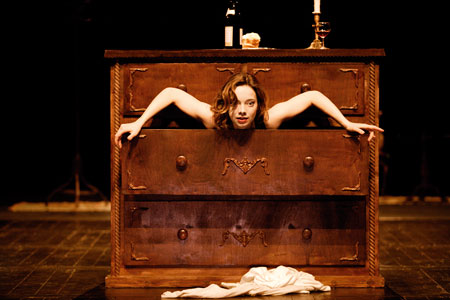 Conceived and directed by the performer’s mother, Victoria Thieree Chaplin (Yup, they are daughter and granddaughter of that Chaplin and come by their talent honestly), the show combines music, movement and mime with uncommon acrobatic grace and agility. There is no plot but a vague sense of menace and relief occurs again and again as Thieree’s co-performer, the very talented dancer Jaime Martinez, seeks her, finds her, loses her again and rescues her in a series of fast-moving vignettes. From what does he rescue her? Curtains, for one thing, enormous red velvet swags that flank the stage and move in curious ways. And clothing that seems to have a mind of its own.

The show begins with body parts, some fake and some belonging to Thieree, snaking in and out of a chest of drawers. It may not sound it – because words are inadequate to describe the visuals – but this all is very funny. Thieree then proceeds to swing on a trapeze, climb a never-ending bolt of red cloth and disappear in and out of those mysterious curtains. She does it all with a cheerful insouciance that is almost childlike. Actually, the hallmark of this production is a childlike sense of wonder that flows gracefully from the performer to the audience and back again. The cast is filled out with two silent assistants and puppets, lots of puppets from the Punch and Judy variety to giant exotic Indonesian shadow creations. A hat rack becomes much more than a prop. Nothing is quite what it seems as familiar objects take on new life.

Thieree is a child of the circus. Her parents, Victoria Chaplin and Jean-Baptiste Thieree were the founders of Cirque Imaginaire and Cirque Invisible, credited with the birth of the “new circus” movement in Europe, then Canada and now worldwide. Their business was illusion and a kind of magic that was passed along to their daughter. That it is stage magic is all the more wonderful as it can be shared.