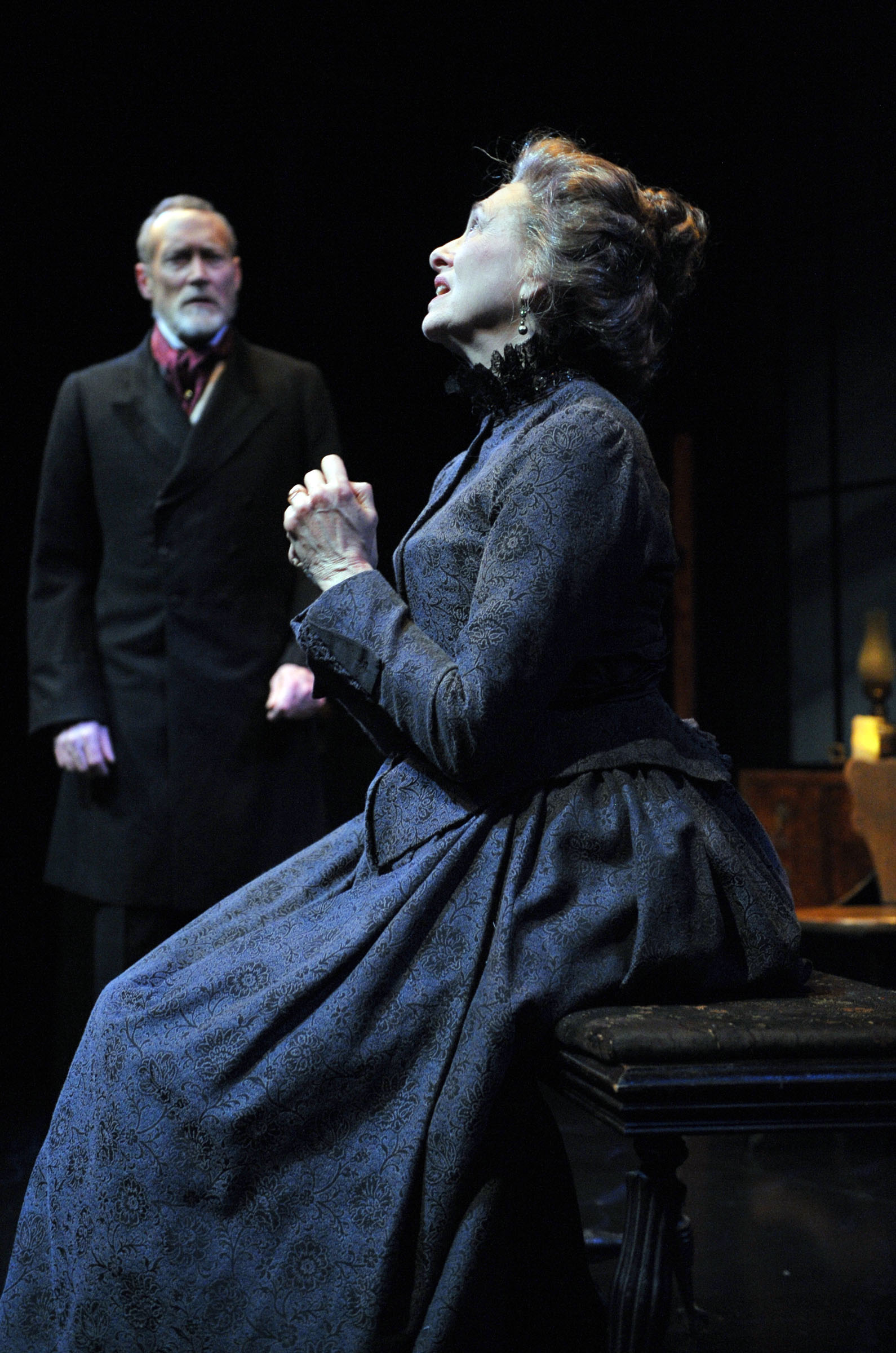 By Henrik Ibsen
In a new version by David Elridge
Directed by Barbara Oliver
Aurora Theatre, Berkeley
April 2-May 9, 2010
www.auroratheatre.org

It’s not hard to figure out why Aurora Theatre chose to mount Henrik Ibsen’s rarely-performed “John Gabriel Borkman” in this recession-ridden year. The 1896 drama tells of a powerful banker who embezzles funds, leaving hundreds of investors without a dime, then goes to prison and is eventually released, bitter but unrepentant. Yes, in the wake of our own banking scandals and Ponzi schemes, it certainly resonates.

But what brings audiences into the theater does not necessarily keep them in their seats. “John Gabriel Borkman,” although wonderfully performed, well directed and attractively designed, simply is not a very compelling play for our times. The embezzlement and ensuing scandal is really just a frame for a domestic melodrama. While the disgraced financier played by the masterful James Carpenter who was Aurora’s “Master Builder” a few years ago, paces upstairs “like a sick wolf in a cage,” his wife (Karen Grassie) and her twin sister (Karen Lewis) – who also happens to be Borkman’s old love – contend for his son. Aaron Wilton’s young man, Erhart, puts the callow in “callow youth.” He is casually fond of Gunhild, his cold, possessive mother, and his aunt Ella, who essentially raised him during the time of his father’s disgrace, but now he wants to go his own way. Particularly in the company of Fanny Wilton (Pamela Gaye Walker), the pretty and vivacious divorcee down the road. “I am young!” he repeatedly tells his family. Sorry to say, it gets a laugh every time.

Many of the lines in this hoary saga do elicit laughter, although one suspects they were not intended to. John Gabriel’s situation is not funny. He firmly believes that, given eight more days to complete his scheme, riches beyond his dreams would have been realized, the investors would have been none the wiser and he would have the power he craves. He also believes that he was betrayed by a rival for Ella’s love. He lives alone in the upstairs rooms, sees virtually no one and never goes out. He goes over his trial and disgrace in minute detail and is figuring out how he will do it all better next time around. He has a vision, a calling. He is the portrait of a megalomaniac.

Norway is a cold country and it would appear, from this play, that it breeds cold hearts. Borkman loves nothing so much as his dream of wealth and power. His wife only dreams of revenge on the husband who disgraced her. Ella just wants the young man, and to give him her name to boot. Erhart and his lady just want to have fun and the put-upon maid (Lizzie Calogero) is disgusted with them all. The only truly human person in the entire play is Vilhelm Foldal, a penniless poet who is Borkman’s oldest and now only friend. He is portrayed with open-hearted warmth by Jack Powell. Even when his own beloved daughter (also Calogero) runs him over in the sleigh that is taking her away with Erhart and Mrs. Wilton, Foldal dances with joy over her freedom and opportunity. He is like a lovable bunny in this den of wolves and one senses that he will not last long.

The play is relentlessly misogynistic, as is its protagonist who considers women the root of all his evils. No wonder, considering the women in his life. Gunhild, unloved, disgraced in society, and dependent on her detested twin for her living expenses (when Borkman knew he was doomed he cleverly and conveniently put his house and a good deal of money into his sister-in-law’s name), is an angry and bitter woman. Mrs. Wilton, the gay divorcee is a schemer and even young Frida Foldal is willing to be used as long as she can get what she wants – which seems to be out. Ella is the best of the bunch but she too wants what she wants. The final scene, implying reconciliation between the sisters, is meant to be moving. But who cares about these awful people? In the end, the play’s the thing and this one is not Ibsen’s best.