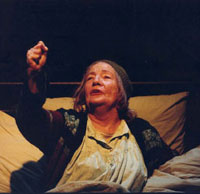 The literal translation of the title of this play is "town without laughter", although the script refers more generally to a "place" without laughter, which gives some indication of its tone. Tom Murphy&#146;s dark, gripping reflection on disconnection, loss, and desperation is set in a rotting thatched cottage where senile grandmother Mommo (Pauline Flanagan) is cared for by granddaughter Mary (Jane Brennan). The old woman was once a famed seancha� (storyteller), and is now driving Mary to the edge by reciting the same yarn over and over again; a tale about a laughing contest in a town which subsequently changed its name to that of the title.

Mommo&#146;s refusal to reach a resolution in her story works as a controlling metaphor for the play on the whole, which is centrally concerned with unresolved tensions and a frustrated desire for catharsis. Mary, desperate to hear the ending, tries to prompt her grandmother into completing the tale in the hope that it will somehow answer all of her questions. Enter Dolly (Olwen Fouere), Mary&#146;s younger sister. Dolly is tough on top, but harbors problems of her own. She served for many years as Mommo&#146;s caregiver, and still feels her older sister, who was away for many years and has only recently returned home, has had it easy. Conflict ensues when Dolly breaks some news to Mary, and makes a startling proposal to help ease her own suffering.

Bailegangaire is another of Tom Murphy&#146;s secular humanist meditations on the fate of people trapped by their desire for freedom from themselves. Each of the characters is bound by a combination of circumstance, environment, and psychology. Though it is tempting to classify it as a character study, the script is much too densely loaded with metaphysical rumination and with rich, poetic dialogue to pass for mere psychodrama. Most obviously non-naturalistic is Mommo&#146;s lengthy story, which runs for the entire play. The speech is beautifully written, drawing on the language of classic Irish fireside storytelling, but almost Joycean in its intricacy.

The theatrical aesthetics run even deeper, however, as Murphy builds the narrative structure through the uncertainties of his characters. The quasi-elliptical exchanges between the three women and the frequent sense that no one is getting through to anyone else leads to a profound empathy with the characters and an immersion in Murphy&#146;s distinctive theatrical universe. There is sometimes a sense that it is almost too rich, demanding concentration and commitment from its audience which is rewarded only by a need for yet more deliberation once it has ended. Though obviously deeply concerned with humankind and its struggles with itself, the text offers a relatively uplifting ending which, relief though it is, seems convenient in spite of its suggested ambiguities.

The current production at the Peacock is directed by Murphy himself, who brings out every nuance in the script. His superb sense of pace and timing is complemented by three excellent performances both individually and in ensemble. Brennan (The Secret Fall of Constance Wilde) gives a strong sense of her character&#146;s inner frustration through her surface calm. As Mary struggles to remain dutiful and fulfils her sister&#146;s expectations of the &#145;good girl&#146; come home, Brennan is able to show us her pain through voice and demeanor. A sense of unease and restraint surrounds her. This is not true of Dolly, expertly played by Fouere. From the character&#146;s blustering first appearance to her final, rather touching moments, Fouere successfully avoids the cliches of this kind of showy role. With a believable accent and a sense of physical precision which has distinguished her performances in The Playboy of the Western World and Chair, she creates and sustains a characterization which develops and deepens as the play progresses. She is particularly good in the most hysterical scenes, controlling her rage with almost frightening intensity and focus.

Flanagan is the star performer in this production which, given her supporting cast, is both an enviable and unenviable position. She rises to the challenge very well. Her grasp of the structure and cadence of the all-important story is central to the play&#146;s success, and the character&#146;s interaction with the others through a haze of Alzheimer&#146;s is not easy to portray. Flanagan never misses a beat in her delivery and is able to represent the emotional conflict which hides beneath the old lady&#146;s ranting with clarity and conviction.