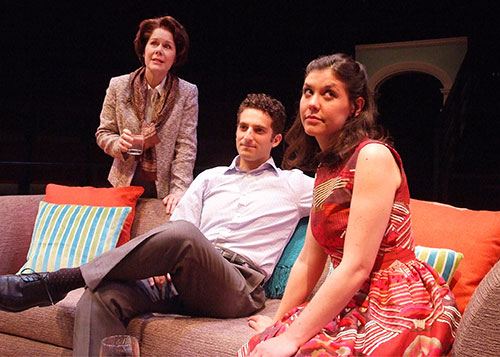 From left, Christine Estabrook, Ben Grane and Zoë Winters in “Be a Good Little Widow”
Photo by Ed Krieger

‘Be a Good Little Widow’

Certain words come with baggage. Take for example “widow,” which conjures the image of an elderly woman enfolded in black. But what if widowhood befalls someone in her twenties who has yet to forge her own identity and is suddenly faced with all manner of expectations about her new societal role?

Such is the dilemma faced by Melody (Zoë Winters) in “Be a Good Little Widow,” in its West Coast premiere at The Old Globe.

When the story opens – and prior to her husband’s demise – newlywed Melody is already alone. Her upwardly mobile lawyer husband, Craig (Ben Graney), has whisked her away from friends and family in Colorado to a new home in Connecticut. Here, Melody is trapped by all the trappings of this new life as Craig’s work has him constantly on the road. She has no job, no aspirations, and often goes days without engaging another living being in conversation. On one of Craig’s infrequent and abbreviated stays, all she can report by way of accomplishment is having organized her sweaters by color.

We learn very little of Melody’s back story beyond she’s three years out of college and, quite frankly, limping through life until Craig’s marriage proposal. Given she’s a daughter of the digital age, it’s surprising that Melody is not spending her days on social media trying to crowd source solutions to her problems.

And, her immediate problem is her disapproving mother-in-law, Hope (Christine Estabrook, who viewers of “Mad Men” know as Gail Holloway on that series). It is a credit to Estabrook and director Hal Brooks that the screen character doesn’t impinge on the character on stage. Hope condemns by using exquisite manners to wait just a little too long to remark on Melody’s decorating skills or to accept a proffered refreshment. This elicits a toothy, tight-as-a-facelift smile on Melody’s face as the bride nervously commits one faux pas after another. Hope’s first visit to the couple’s home feels interminable.

Much of the play’s comedy is gleaned less from written jokes and more on the physicality of Zoë Winters’ performance: Boredom manifested by draping herself over the sofa back like Gumby or a languid yoga stretch that just happens to find a junk food morsel on the coffee table and fluidly conveys it to Melody’s mouth. Keep an eye on the career of this remarkable actress.

As the play’s title suggests, Craig’s number is up and Melody, idly TV channel-surfing, learns of his death in a fiery plane crash. If Melody was having trouble coping with life before Craig’s death, all bets are off now.

A long-time widow herself, Hope springs into action wrestling decision making from Melody in order to make all the funeral arrangements herself. Hope is empowered by the rules she’s learned as a member of a local widow club to which she’s taken the liberty of enrolling Melody. While these gestures may appear helpful, they are self-serving because Hope is just as much out to sea as Melody. “There is no word for someone like me,” she cries out, when facing the realization that she’s lost both a husband and now her only child. The scenes between Melody and Hope are at the heart of this story and are exquisitely delivered.

There’s a fourth character, Brad (Kelsey Kurz), who was Craig’s assistant at the law firm. This gives him the excuse to drop by the house to express his condolences and collect documents. It also gives Melody the excuse to talk and talk and talk about her situation, her loneliness, her fear, her mother-in-law. The scenes are awkward because Brad can do little more than just stand there listening to her. In fact, the character of Brad could have been dropped in favor of Melody simply unburdening herself over the phone with a girlfriend.

We haven’t seen the last of Craig, who becomes more of a presence in Melody’s life as his ghost appears several times during the story. In these conversations, Melody learns the meaning of love and comes to grips with what she’s lost.

Lighting Design Seth Reiser transform lights into yet another character in the play: Slightly dimmer when the ghostly Craig is on stage with a fluid resolve to brighter illumination when he departs, and Melody realizes she’s back in reality. Another example is pinpoint lighting on white lilies in a vase in an otherwise dark room that conveys just the right somber, reverent mood the play deserves.