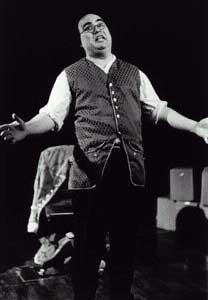 October, 2004 is, "Joshtoberfest", the actor Josh Kornbluth jokes with an audience in a casual preamble to the monologue about to be unfurled. Haiku Tunnel is being released on DVD, he&#146;s touring nationally with Love & Taxes, a filmed version of Red Diaper Baby is premiering at the Mill Valley Film Festival, and here he is in San Francisco, brushing off Ben Franklin: Unplugged, a 1998 piece appearing in a new production at the Magic Theatre in San Francisco. If he were good-looking, you might hate him. As it is, he looks, as he discovered one morning in the bathroom mirror, an awful lot like Ben Franklin. The Jewish Ben Franklin.

This kind of irony and juxtaposition is central to the humor of Kornbluth, whose success has come not just from his ability to spit out his material in lightning-fast, often hilarious ways, but from extremely well-crafted scripts. Autobiographical in nature, and as he puts it, "always about the same thing: father/son relationships" the Franklin saga is no exception. After striking upon the idea that he must seize the marketing opportunities based on his resemblance to the esteemed man of history, the monologue becomes a kind of detective story, as he begins to sleuth not only whether there is any merit in telling Franklin&#146;s tale, but how to link it to his own. Key is the discovery that Franklin had an illegitimate son, William, whose own quest, like Kornbluth&#146;s continually fruitless mission to live up to the achievements and expectations of his father, ended-up with the two Franklins standing on opposite sides of the line during the Revolutionary War, hating each other.

"The past is another country," says Kornbluth early in the show, and during moments where he seems lost in his Franklinmania, obsessed as any grad student would be, things begin to dull-down, become as opaque as the stilted language from Franklin&#146;s autobiography, from which Kornbluth reads extended passages. Quickly enough, however, the storyteller&#146;s wit and timing save us from these doldrums, and we are back on a wild chase from strangely staffed bookstores in San Francisco to his Grandfather&#146;s 100th Birthday celebration in Manhattan, to the Franklin collection at Yale University, where Kornbluth talks his way into unlimited access to the original letters between Franklin father and son, by pretending to be a leading academic.

As an epic, the narrative never builds to the kind of satisfying tie-in and cathartic emotional conclusion that would make it a masterpiece. As Kornbluth puts it, "I&#146;ve been telling stories re: Dad for years but I can&#146;t seem to reconnect". Still, as a well-told story with lots of engaging "schtick", Kornbluth can&#146;t be beat. And always, touchingly, beneath the comedy, Kornbluth&#146;s openly stated desire to find love and connection in the world makes him, despite his ranting, a very sympathetic character.