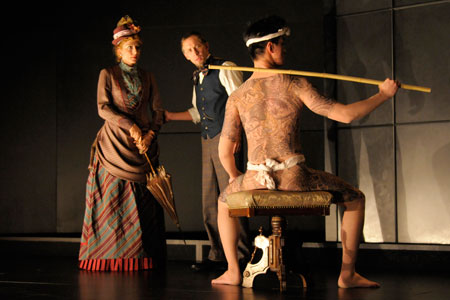 So, what is it with the Japanese and cameras? They make them, they improve them and, as any tourist can attest, they use them probably more than any other single group of people on earth. Looking through the singular lens of playwright Naomi Iizuka’s “Concerning Strange Devices From the Distant West,” in its world premiere at Berkeley Repertory Theatre, may or may not shed much light on this question. In fact, this episodic, fast-moving tale of lust, abandonment, curiosity, thievery and blackmail may raise even more. But it is fascinating to watch.

Masterfully directed by Berkeley Rep Associate Artistic Director Les Waters and brilliantly lit by Alexander V. Nichols (at times, as is appropriate for a play about photography, the lighting becomes almost a character in itself); watching “Strange Devices” is a little like flipping through a stack of snapshots, with short scenes that skitter back and forth through time.

A prim Victorian-era woman (Kate Eastwood Norris) visits a famed photographer’s studio in Yokohama. An American art history professor (Bruce McKenzie) gets (apparently) tipsy while chatting up his pretty young Japanese translator (Teresa Avia Lim) in a hip Tokyo hotel bar. A young rickshaw driver (Johnny Wu), with tattoos all over his body, sits mutely as a photographer (McKenzie again) arranges his limbs in a pose. A young woman (Lim) gives us a crash course in the optics of photography. A lovely girl in a kimono (Lim again) sits silent before a window, waiting for her lover.

At first it seems as if all these disparate puzzle pieces never will come together in a coherent whole but, in the end, they gradually match up. Surprisingly so. Iizuka’s inventive dramatic mosaic teases the brain, much as Mimi Lien’s clever set design, Annie Smart’s costumes and Leah Gelpe’s video projections please the eye. It’s a stimulating journey through Japan, from the mid-19th Century, when the foreign trade barriers came down and Westerners went mad for photographic depictions of this “exotic” land, to the technological present, when other barriers – sexual and moral – have been breached.

A picture, they say, is worth a thousand words. But, especially in “Concerning Strange Devices From the West,” things are not always what they appear to be.