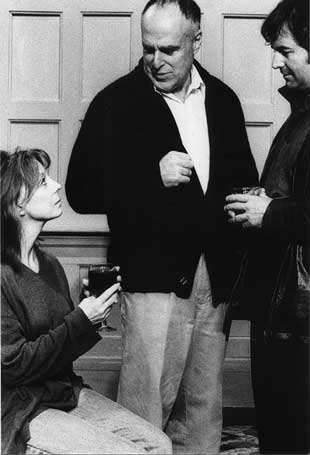 An extramarital affair.Almost a cliche, yet to the people having the affair it can become the center of the universe.At least at the beginning. In Betrayal, playwright Harold Pinter works backwards.The first two scenes are in the present.Scene one, a man and a woman having a drink in a pub having ended their seven year affair two years ago. She, Emma (Suzanne Ford), looks tense. He, Jerry (Stephen Hoye) is superficially more relaxed. Their conversation is banal: How are (the children)? And how are yours? How is your spouse?

Emma discloses she has been up all night talking with her husband, Robert, and that she and her husband are splitting up afterRobert has confessed that he has had many affairs. She feels betrayed and there ensues a very British discussion of who has betrayed whom. Many uncomfortable little silences between the two follow, not the uncomfortable silences of strangers on a blind date, but the kind of awkward silences that can only exist between people who once were intimate and now are seemingly disconnected. She admits she has told her husband about their affair. Jerry is aghast as Robert is his best friend and they have had a long time business relationship.The two men have had lunch that very day and the cuckolded Robert had not let on he knew. Jerry&#146;s sense of being betrayed by Emma overwhelm any empathy he might have felt.

The remaining action goes back in time, from the chilly breakup in Emma and Jerry&#146;s small London flat where they have played house for seven years to the torrid beginning when Jerry has hidden in Emma&#146;s bedroom hoping to surprise Emma and declare his passion for her should she come up to fix her hair. A cynical Robert (Richard Fancy) comes in at the end of the declaration, obviously suspecting even before the affair has begun.

Pinter never reveals his point of view, but lets the audience draw its own conclusions offering scenes of the affair alternating with scenes of the two male friends meeting, Robert baiting Jerry (who does not think the husband suspects), always suggesting a game of squash, symbolic of male companionship and Jerry always backing away from the direct competition.In one scene Robert proposes a game at a social event with Emma present. She urges them to play together again and suggests she meet them after for lunch. Robert quickly says no, &#147;A game of squash isn&#146;t simply a game of squash … you don&#146;t want a woman in the shower… in the cafe…&#148; There is no doubt to anyone but Jerry why Robert keeps pushing the game.

These are the cultured elite.Emma works in a gallery; the two men were poetry editors in their youth. Robert is now a publisher of modern works, who hates modern literature, and Jerry is a literary agent whose client&#146;s best seller was turned down by Robert.Their dialogue is at times witty, often brittle.They do not engage in ugly confrontations.They often speak on several levels at once.When Emma tells Robert of the long affair, he says coldly, &#147;I&#146;ve always liked Jerry.To tell you the truth I&#146;ve often rather liked him better than I&#146;ve liked you. Very talented at discovering new talent, old Jerry.&#148;

In the first scene of the affair in the flat Jerry says to Emma, &#147;All these words I&#146;m saying have never been said before…I&#146;m crazy about you…This is the only thing that&#146;s ever happened.&#148; The affair is the focus of their lives, they have lost perspective.In the final scene of the affair the two are having a squabble, not unlike the squabble of a long married couple.Emma says, &#147;It&#146;s just an empty home.&#148;Jerry replies, &#147;It&#146;s not a home.You have a home.I have a home.&#148; They cancel the lease.The affair ends not with a bang but a whimper.Pinter, however, having structured the play in reverse, leaves the audience in an upbeat mood with the last scene being the one in which Jerry is declaring his feelings for Emma. Despite sounding like this device might be kitsch or confusing, it works.

Richard Fancy is perfect as the cynical publisher husband, his disdain palpable in his slightest move. Stephen Hoye is the likeable, affectionate lover Jerry who really does not understand as much as he would like one to think.And Susan Ford is the stiff upper lipped wife who wants more emotionally than either man is ready to give. There is a brief, but delicious, appearance of Chris McCabe as the Italian waiter for whom his job and food are everything.

Despite a couple of slipped lines this was a delightful performance of a play which is both entertaining and thought provoking. Betrayal is an intimate work that plays well in the intimate setting of the Pacific Resident Theater in Venice. The spare scene by John Berger shifts easily with a few simple furniture moves from pub to drawing room to flat and to Italian restaurant. The theme of betrayal, and what exactly is meant by betrayal, is perhaps best illustrated by this bit of dialogue between the couple having the affair:

Yet Emma feels betrayed when she learns her husband has had affairs and Jerry feels betrayed that Emma has revealed their affair to Robert. Betrayal is in the eye of the beholder.