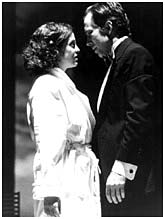 O.K., so it&#146;s Aeschylus again but Charles L. Mee&#146;s zany rehash of the ancient story of 50 brides who flee 50 grooms rather than be forced into marriage bears little outward resemblance to the somber Oresteia that opened the Rep&#146;s new theater earlier this year. And yet, the same themes of justice and revenge resonate through both.

Three breathless brides rush onto a stage which is carpeted with pink wrestling mats (for good reason, as we shall see), wearing white gowns and backpacks and one of them immediately jumps out of her clothes and into a bath. Pretty soon all three of them join in a riotous chorus of &#147;You Don&#146;t Own Me&#148; &#150; and that&#146;s just for openers. They have stumbled into a private villa on the Italian coast, which they think is a hotel until the owner shows up.

The three women represent their sisters, the other 47 of whom are presumably wandering about town or sequestered on the ship that has brought them from Greece. They are Lydia (Carolyn Baeumler), the bather, but otherwise a normal-enough sort; Olympia (Aimee Guillot who does like a wonderful Valley Girl), vain, a little dim and passionately devoted to her creature comforts; and Thyona (K.J. Sanchez) a hard-edged feminist. Fleeing the father who contracted to marry them to their cousins, and their grooms who have been left waiting at the altar, the brides beg their host, Piero (a suave J. Michael Flynn) for sanctuary.

When they don&#146;t immediately receive what they want (Piero is a prudent and deliberate fellow who is not sure he wants to take on 50 refugees in bridal gowns), they fling themselves all over the stage in a frenzy of man hating (hence the wrestling mats). It is an amazing display and very funny, since they are talking all the while in counterpoint. Soon helicopters are heard overhead (fabulous lighting and sound effects by Robert Wierzel and Matthew Mezick, respectively, with a tongue-in-cheek bow to Miss Saigon) and three bridegrooms appear, flight suits zipped over their wedding attire.

One couple, Lydia and the stammering Nikos (Bruce McKenzie) manage to fall in love in the midst of the mayhem and, since Lydia went back on her vow to liquidate her bridegroom, she is put on trial by her sisters. This is a clear echo of The Oresteia, which also has a courtroom scene for its finale. The ensuing arguments for women&#146;s autonomy, matrimony and the connection with others are the serious heart of this very funny play.

The entire ensemble, which also includes a gay nephew who collects Barbie dolls and a pair of visiting houseguests living &#147;la dolce vita,&#148; is superb. In the end, the focus is on Bella (Lauren Klein), the old Italian mother who serves as judge at Lydia&#146;s trial. &#147;If we cannot embrace another what hope do we have of life?&#148; she asks. At that moment the thoughtful audience member will realize it is all of us who are on trial.

Big Love has some big ideas mixed in with the fun.