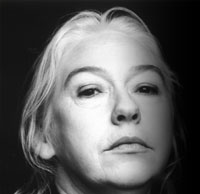 Big Maggie is a compelling vision of the Irish mother as sociopath. Maggie Polpin (Marie Mullen) is a just widowed mother of four living in rural Ireland, now sole owner of the family shop and farm. She a complex figure, far from the cliches of Irish femininity which preceded her. This is a hard-bitten, uncompromising woman who puts her personal security above all other concerns. She rejects the place which cultural precedent has laid out for her and chooses to drive all of her children away rather than nurture them like a mother hen.

First to go is the eldest son, promised a share of the business by his late father and eager to take what he feels he&#146;s owed. When Maggie reveals there is no will and that the old man had signed over everything to her one year before, the son realises his options are limited and he must either leave home or live under his mother&#146;s control. He chooses the former. As the play progresses, Maggie confronts each of her children, shattering their image of themselves until all of them have been forced to leave the nest. She always maintains the position that it is for their own good and that they must learn how hard and cruel the world really is.

Maggie’s ruthlessness makes her a frightening and repellent character, yet Keane anchors her in a rural Irish milieu of the late 1960s which helps to explain it. The backstory gradually reveals the life she has led to this point and the role she has been forced to play as wife and mother to a philandering husband and ungrateful children. She has no time for parochial hypocrisy and is no more impressed by the good wishes people express by her husband&#146;s grave than their attempts to make friendly conversation instead of paying their bills. She has seen the world through eyes which seek out the dark corners of Irish culture, a perspective reinforced by her status and gender.

The complexity in the play comes from the fact that from Maggie&#146;s point of view, she is always right. Though she is malicious and stubborn, each of her predictions about her children come true. In principle her plan to make adults of them is preferable to the smothering matriarchalism which was the norm even as Keane wrote the play in 1969. Like much of Keane&#146;s work, there is a strong polemical voice running through it which makes it a confrontational text even thirty years after its first appearance. But circumstances have changed since then. While the basic questions about a woman&#146;s right to self-determination in Irish society remain current, the intervening years of feminist political and cultural activity are notably absent in the sub-text.

Maggie seems a unique figure who is disconnected from the modern world in a way which may alienate a contemporary audience. She seems more malicious than is necessary from a post-feminist perspective and frequently appears to be insanely self-involved, virtually delusional. It is interesting therefore that this Abbey production is directed by Druid Theatre founder Garry Hynes and showcases her fellow co-founder Marie Mullen in the lead role. Fresh from their international success with The Beauty Queen of Leenane, one must presume that these individuals approached Keane&#146;s text with an eye for a contemporary feminist reading. In these terms it comes across more like a mid-1970s vision of female power, and the play seems to have been stripped down in a way which deliberately robs it of colour in an attempt to draw attention to its message. Whether this is some kind of postmodern double-bluff which criticises such hard-line independence is unclear.

The set design is quite literally grey and lifeless, a sepulchral evocation of a world drained of energy by the dullness of rural Irish life. Maggie herself is an extremely severe figure, primly dressed with her hair pulled tightly back from a face which is always virtually white and frozen in a mask of callous self-assurance. Though the costumes on the whole reflect the period, there is none of the gawky cheerfulness of postmodern retro-fetishism here. Everything on stage is clinical and precise in a way which matches the interpretation of the character being created here: rock hard, impenetrable, and extremely cold.

The ambiguities are still there however. The audience is challenged by the schism between how Maggie acts and the seemingly good reasoning behind it. One can&#146;t help but feel sad for her as it ends; if more out of pity than sympathy. She stands alone in the spotlight in front of a grey set with grey produce representing the stock in her shop behind her, and as the shop counter descends into the stage floor, she bends over to pick up the fallen bright red gloves left by her youngest daughter. Is there a moment of doubt here? Does Maggie realise deep down that her will to be her own person has left her with nothing?

Whether or not this production of Big Maggie is really a substantial re-visioning of the text, there are other reasons to see it, of course. The National Theatre is intended to be a forum for the great works of Irish drama regardless of their contemporaneity. If, as the author&#146;s nephew Fergal notes in the programme "…Maggie is still one of the major roles by which an Irish stage actress is judged" then it still holds a general interest for the average theatre-goer in terms of the performance of its leading lady. Marie Mullen received a Tony Award in 1998 for The Beauty Queen of Leenane and therefore presumably finds herself added to the pantheon of great Irish performers. This complex character has been played by actors including Anna Manahan, Brenda Fricker, Marie Kean, and Pat Leavy. Each would have brought a distinctive personality to the role which is easy to envision without having seen the individuals in action. Unfortunately the noted deliberate severeness of this production makes Mullen&#146;s performance of Maggie more a study in concentration than a rich tapestry of conflicts and sub-currents. She seems to have no personality other than her determination to not let anything get to her or thwart her plans for her life. This seems to be a directorial choice rather than a failure of thespian skill, but it still means the audience has less to hold onto than they might.

Supporting performances from all and sundry are workmanlike enough. Peter Hanly and Eamon Morrissey come off well as two of the livelier characters in the piece (a libidinous traveling salesman and a local stone mason respectively). Dawn Bradfield cannot command quite the weight she needs as Maggie&#146;s most defiant and eldest daughter. Indeed most of the children are so overwhelmed by her presence as a character that the actors find themselves correspondingly overshadowed.