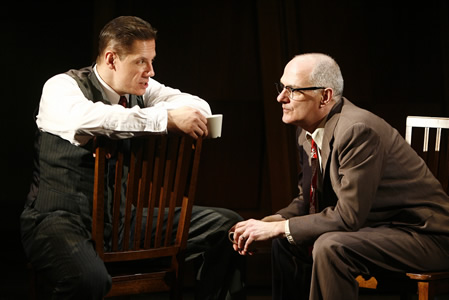 By Stephen Bergman and Janet Surrey

Bill W. and Dr. Bob, as they’re referred to in the spirit of anonymity that pervades AA and the other programs, came up with an idea that seems simple and common-sensical today but was then outside the box. The idea was, of course, that the people best suited to help others with a particular sanity and life-threatening problem were those who suffered from the problem themselves. Drunks could help other drunks get sober and stay sober and grow emotionally and spiritually.

The new play (it had a successful Boston run before its New York opening) dramatizes AA’s origins and early struggles. The first act tends to be a bit clunky in its effort to quickly sketch in all the facts—Bill Wilson’s descent into the despair of alcoholism, his failing marriage, the spiritual experience that gave him hope, his radical insight that could stay sober if he worked with another drunk, and his 1935 meeting with Dr. Bob in Akron, Ohio. Act Two, however, is richer, exploring the personalities of the two men, the enthusiastic stockbroker, Bill Wilson, and the more down-to-earth doctor, Bob Smith.

They were the perfect pair to pull it all off, to keep each other sober and to start, with the two of them and one other alcoholic, the thousands of AA meetings that take place each day almost all over the world. When that first AA meeting is dramatized on the stage, with Bill W. and Dr. Bob and one other man, it is a thrilling theatrical moment. Who in any theatre audience is not themselves or been close to someone who either is in recovery with AA or has, tragically, tried and failed? The number must be small.

The acting is strong. Robert Kravoski plays Bill W. as a cocky, flamboyant dreamer all set, like Icarus, to fly high and spread his ideas to the world, and to do it right now. Dr. Bob, played brilliantly by Patrick Husted, is the glue that holds it all together, and who helps keep Bill W. sober but also helps him, in his enthusiasm for the cause, from sailing off into the ether.

Rachel Harker, as the wife of Bill W. and Kathleen Doyle as Dr. Bob’s wife, play characters that could easily slip into stereotypes of long-suffering spouses. It is, of course, much more complex than that and these two actors show the painfully mixed emotions of the wives flawlessly. The audience even gets to eavesdrop on the first informal meeting of Alanon, the group that quickly formed made up, at first, of the wives of AA members.

Marc Carver and Deanna Dunmyer play multiple roles, always a challenge for an actor, and they do it beautifully. Rick Lombardo’s direction keeps this episodic play moving, and has obviously helped the actors find powerful emotional depths. A quibble would be the set, by Anita Fuchs, made up big panels that slide back and forth apparently to help reinforce the many different scenes, but they seem a bit distracting and unnecessary. A bare stage with a few pieces of furniture would have done the job just fine. Costumes by Jane Alois Stein help set the play in its period and look like clothes worn by real people.

The audience was made up largely of Twelve Step program members who were not, of course, a typical New York theatre audience. On the other hand, New York City just might have a higher percentage of people in some kind of Twelve Step recovery than many other cities, and, as good as this production is, the play deserves to tap into this group and run forever. One day at a time.