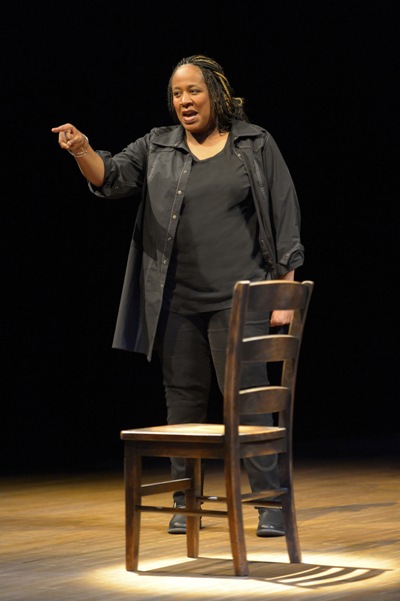 It’s all in the title of Dael Orlandersmith’s “Black N Blue Boys/Broken Men.” The former tend to turn into the latter in adulthood, and it usually is broken men who beat little boys till they are black and blue in the first place. This may not be news to anybody who thinks about it but, as presented onstage by the astonishingly versatile Pulitzer Prize-finalist Orlandersmith (“Yellowman”) it is something of a visceral and revelatory experience.

Changing voices, body language, but never the layered black costume by Anita Yavitch, the actress/writer parades a series of what only can be called case studies before us. All the characters she portrays are male. The children — a Puerto Rican teen, sexually abused by his mother and locked into the social welfare system; the child of alcohol-abusing Irish immigrants who pulls himself up by his bootstraps only to find that the apple doesn’t fall far from the tree; the son of a drug addicted prostitute who watches his beloved little sister die because of parental negligence and says “I wonder where God is” — tell a heartbreaking and stomach-turning tale.

The adults — who include an uncle who abuses his nephew and goes to jail for it, excusing himself by saying, “I was made this way. I can’t help it,” and a Central Park groundskeeper who watches an affluent father and his older son beat and berate the younger kid into “being a man” — are a little less gripping, perhaps because of the point of view, but no less telling. “Just because somebody has a kid doesn’t make ’em a parent,” notes the disgusted groundskeeper, and that may be the point.

With no props and no scenery but a chair, Orlandersmith encompasses whole worlds on Daniel Ostling’s raked wood-plank stage. Her talent as an actress is only matched by her writing, which is poetic, evocative, searing and profane. There are touches of humor but the overall effect is as grim as the material. This is not a comfortable or “entertaining” show. A little less may have been more. Several of the boys — Chaco, the Puerto Rican who becomes a male hustler and then builds a new life for himself, and Ian the Irish lad who also rises only to fall again — are revisited, and it becomes tedious toward the end. The show, which was commissioned in conjunction with Chicago’s prestigious Goodman Theater (where it will appear this fall), needs a little work, preferably with a scissors.

But, even as it is, it is a powerful thing to see. And something to think about.