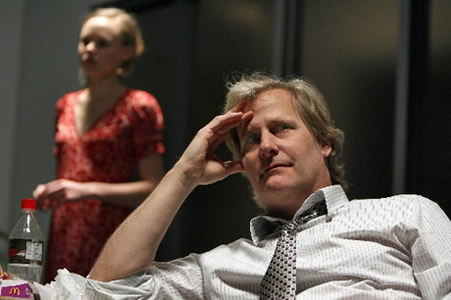 First commissioned and presented by the Edinburgh International Festival, August 2005.

“The Tempest” is a simple tale with fewer plots than most of WS’s plays. This is a good and bad thing. It means the script, the acting, the production are exposed, but only the script is well tested by time and tradition. Everyone grasps the shipwreck story; everyone understands the father daughter relationship of Prospero and Miranda, based on sixteen years alone together on an “uninhabited island.” Almost everyone understands the dramatic conventions: take for instance that Miranda never asked a question about her circumstances. The past happened in the blink of an eye. Father and daughter in any case are not as important anyway as the “monster” Caliban, the true owner-inheritor of the island through his mother, the witch Sycorax, and the center of the play’s theatricality. The monster is always after Miranda, who “does not like to look on him.” That is all poetry and circumstance. In fact, this Caliban is a good looking, sexy man who makes his pursuit of Miranda credible.It has always seemed rather wasteful of WS to offer a fairytale monster and a pretty girl to enact the sexual metaphor, which had hundreds of years of literary and theatrical history by then. They are far more plausible drfamatically as a nearly human beast and a sweet, rather dimchild.

One day a royal ship carrying the father’s old enemies sails near. Prospero uses his magic to wreck the ship, intending to bring the bad royals aboard to justice and punishment. But the girl intercedes for them after meeting Prince Ferdinand among the passengers, the first man she ever did see. “Oh brave new world that has such people in it”. Their meeting is the magical moment in this production: they are wonder struck, silent; slowly they smile, a new world begins, a pleasure for us to see.

The play has lost none of its appeals over time, but this production undermines some of its charm. Mandy Patinkin as Prospero, for instance, brings the strangeness of romance down to earth, say Brooklyn. Mr. Patinkin’s manner suggests a good Jewish uncle looking after his niece’s honor. Romance is all very well, he more or less says, within conventional limits of courtship and marriage. In a word, he domesticates romance to a family occasion. It’s plausible that WS added the couple, almost as necessary on the popular stage for the play’s recognition, to an experiment with monstrosity, foreigness and bestiality. The production reverses the emphasis. It is a loss.

You can’t go home again, everybody knows that. “Blackbird” says so again. A famous actress, Una (Alison Pill), tries to slip around the implied penalty in the truism when her company schedules a tour with “The Cherry Orchard” to her home town of Buffalo. Maybe it doesn’t count, she thinks, since the company’s touring choice is not her own. But it counts enough for things to go wrong. One amusing twist forms around her former boyfriend in Buffalo. He likes the possibility of her coming back and him getting another chance with her. But basically there’s nothing at stake in the company’s final decision not to play Buffalo and the script remains poised on its many one liners. You’ll miss the inside joke, well, literary allusion, if you don’t recall that “The Cherry Orchard” features a famous actress slated to play her home town. So, this is a version of theater on theater on theater. Unless you expect action onstage to be more significant than the script’s allusions; in which case book a different show.