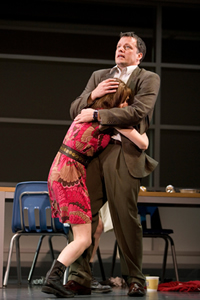 Once in a welcome while something comes along to remind the critic why she took this job in the first place. David Harrower’s “Blackbird” is just such a something.

The ACT production follows on the heels of the show’s 2007 Olivier Award for Best New Play and the acclaimed current New York version starring Jeff Daniels. It doesn’t have to take a back seat to either of them. Directed by Loretta Greco (ACT’s “Lackawanna Blues”) and starring Steven Culp, the late, lamented Rex Van de Camp of “Desperate Housewives,” and the very capable young New York actress Jessi Campbell, it’s a taut 90 minute roller coaster ride of emotion you won’t soon forget.

The subject matter is sensitive. A 40-year-old man once seduced a 12-year-old girl. (Or did she seduce him?) After a stint in prison for the crime, the man changes his name, moves away and begins a new, respectable life. No pedophile he, it was a one time mistake (or was it?). More than a decade later, bitter, angry and, perhaps, still in love, she comes after him, confronting him in the untidy break room at his work. Robert Brill’s scene design may be messy, littered with cups, paper plates, soda cans and an overfull garbage can, but it is nothing compared to what is going on in these peoples brains.

“We have to process it, no matter how late,” says Peter, the man, early on, referring to a work order that has kept him at the office. The line is a blueprint for what will go on between the two, a prelude to the matter at hand.

First we get her version of what happened: an innocent meeting at a neighborhood barbecue, little notes left on his car windshield, a meeting in the park that ends in a groping session under a bush and, finally, a carefully planned consensual tryst. But it goes awry. After he goes out for cigarettes, the man doesn’t come back for hours. Panicked at being on her own in a foreign country (they have taken a ferry to Holland), she searches the town for him, ends up in a police station and her parents and the law take it from there. They never see each other again. Her court testimony is given from behind a screen. The judge said that the girl seemed to have “suspiciously adult leanings” but Peter, the man, then named Ray, was the one who went to jail. Una, the girl, remained as an outcast in their small town, ostracized by her peers, badgered by her mother and obsessed with thoughts of revenge.

But Peter’s version is a little different. Struck by the enormity of what he had done, he bought his cigarettes and stopped in a pub for first one drink, then another. When he finally did come back for her she was no longer there. Desperate, he hunted for her until dawn then finally turned himself in to the police. “I never meant to leave you,” he says.

Una wants to punish him but she also wants him to help her relive the memories. Shadowy figures come and go outside the cloudy lunchroom windows as their duet goes from anger to yearning and finally explodes in violence. After that, they sit around and talk about clothes, cars and jobs like old friends. But the sexual undercurrent remains, and perhaps something more.

Harrower’s dialogue is spare, half-sentences, stammered utterances that have the ring of truth. Culp and Campbell deliver it expertly, with just the hint of British accents that sound authentic. In fact, this play draws the viewer in, rather as if we were peeking through the window, eavesdropping on a conversation that has the immediacy of real life. The song “Blackbird” sings is not a particularly pretty one but it is truly, sadly all too human.