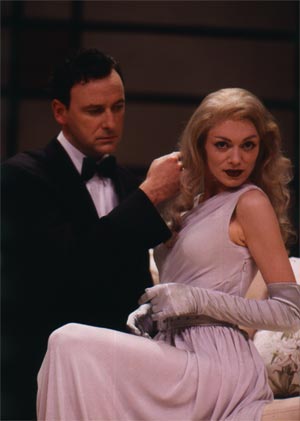 Written and first produced in 1941, at a time when Britain faced destruction and invasion by Nazi forces, Blithe Spirit is a droll comedy about life and death in English society. Being the work of No�l Coward, it is a very particular take on all three. As director Alan Stanford remarks in the program for the Gate Theatre’s current production, "…in the midst of pan European war and national grief, Coward overcame fear and rage with his usual and inimitable sense of mockery. He wrote a comedy about Death." The play was filmed very successfully by David Lean in 1945, showcasing then cutting edge special effects and an unforgettable performance by Margaret Rutherford as the dotty spiritualist Madame Arcati.

Blithe Spirit is the story of a middle aged writer who decides to host a seance as research for a novel he is planning to write about a murderous fake psychic. He is a remarried widower, and the evening begins with a casual chat about his first wife Elvira&#146;s seemingly unquenchable taste for life which came to an abrupt end six years before. The conversation seems to pass without upset for his present wife, Ruth, but when the seance conjures up Elvira in ghost form, things take a decided turn for the worse. Though only he can see her, Elvira&#146;s presence puts considerable strain upon Charles&#146; relationship with Ruth, and forces him to reassess his attitudes towards love and marriage. Has he really gotten over Elvira? Are things really so great with Ruth after all? How is Ruth herself to cope with the literal specter of her predecessor? And just what is Elvira up to anyway? Does she have nefarious designs upon her former husband&#146;s very life?

The play is irresistible on so many levels that it is very difficult to get right, and Stanford&#146;s attractive and entertaining production is sharp, classy, and thoroughly professional. There are serious thematic and psychological threads running through Coward&#146;s drollery, and the director has not missed them. They may not be the most important thing in the production, but they are at least acknowledged. On the whole though it is not the timeliness of the subject of death or the timelessness of the subject of love which stands out here. This production offers the pleasures of a heavy dollop of witty banter delivered by capable performers in a handsome setting. It is scheduled for a long summer run and is likely to provide the requisite level of laughs and wry smiles for the season.

Charles is played by Riste�rd Cooper, last seen on this stage doing the stiff upper lip in An Ideal Husband. He holds the center of the play quite well, eliciting sympathy with a good mixture of likable arrogance and genuine haplessness. Justine Mitchell (Bash) makes an effective Ruth; bossy, but canny enough to realize that the ghost of her husband&#146;s former love has not been lain to rest on more than the obvious level.

Fiona O&#146;Shaughnessy is superb as Elvira. Beautifully costumed and made over under the designs of Bruno Schwengl, she is an impish, ethereal presence from her first appearance. She glides and dances around the stage with grace and sensuality which perfectly encapsulates the paradox that drives the character. She&#146;s the most alive person on the stage even though she&#146;s dead, and her lust for life gives the other characters pause to consider theirs and evaluate how they are spending their time on earth. O&#146;Shaughnessy is energetic and funny, and she plays very well against both Cooper and Mitchell. There is a very nice rapport between them which reveals the subtleties in their relationship, especially as it begins to decay and the true underside of the characters&#146; married life is revealed. There is a corresponding sense of contrast between the two women which is played both for laughs and ironies and works well both ways. O&#146;Shaughnessy shows an ability to shift tone and alter the complexion of a scene which may not seem obvious at first glance and makes her performance all the more enjoyable.

The role of Madame Arcati has fallen here to vet Susan FitzGerald (Therese Raquin). It is a showy part which can easily lead to hamminess. FitzGerald approaches the character as a sort of twenties flapper who hasn&#146;t quite moved with the times. She&#146;s happily caught up in herself in a way which is not entirely befuddled but definitely out of touch, especially with the trendy society types with their healthy forties skepticism. She is good on stage, commanding the scene when required and making the character believable in spite of the mumbo-jumbo dialogue. She has a couple of moments of pathos which are nice, but she&#146;s not always as funny as the character can be. She goes after the big laughs perhaps a little too eagerly, and so misses out on the delicate touches. Lynn Cahill, by contrast, is extremely funny in the much smaller role of Mrs. Bradman, playing each of her scenes with a wonderful array of strained facial expressions as the character attempts to make light of all kinds of hijinks going on around her.

Though slow to start, this production gathers momentum with the arrival of O&#146;Shaughnessy. It subsequently attains a pace which holds to the end. It is engaging, entertaining, and well performed. There is a darker, more ironic, and more pointed drama lurking under the surface, but you are not invited to look for it. Blithe Spirit at the Gate is harmless fun for the summer visitor and the local patron alike.