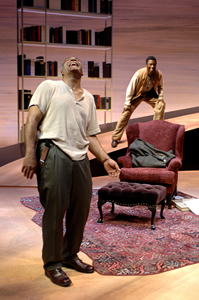 There is an island culture in the South where people paint their doors blue to keep the evil spirits out and the good ones in. There is a middle class culture throughout this country where those reaching for affluence and assimilation shut the doors of their minds to keep the knowledge of where they came from out and their SUVs and iPods and university degrees in. The two worlds come together in Tanya Barfield’s funny, powerful and absorbing drama, “Blue Door.” Although the script follows the lineage of an African American math professor from slave plantation through Reconstruction and all the way to the mean, drug-strewn streets of today’s cities, you don’t have to be black to relate. You just have to be – as most of us are – from somewhere else.

Directed by famed actor-director Delroy Lindo (“Joe Turner’s Come and Gone” plus numerous films and television productions), the story is told by Lewis (David Fonteno), a highly educated black mathematician whose white wife has walked out on him because he refused to go on the Million Man March. Actually, she left because this was just the culmination of a life-long denial of his roots that left Lewis as a white man in a black skin, devoid of any authenticity. “Being black hangs over him like a shroud, no matter how many polysyllabic words come out of his mouth.”

During a sleepless night, Lewis, like Ebenezer Scrooge before him, is visited by a ghost – indeed, several ghosts — although they all are played by the same intrepid actor. Teagle F. Bougere walks away with this show as Lewis’ great grandfather Simon, a former slave; his grandfather Jesse, who was mutilated and burned alive for daring to try to vote, and his younger brother Rex, dead of a drug overdose. It is he who sings the songs composed by the playwright, which range from an African chant to a chain gang lament. It is he who brings the whole sad, sorry (and ultimately triumphant) spectacle of African American history alive before us. His passion and energy are remarkable as he enacts a young man in love, an old man bowed down by disillusion and the despair of a present-day kid on the streets.

Next to him, Lewis is weak tea but that may be more a case of the character than the actor. His struggle to fit into the white academic society that he has worked so hard to become a member of pales next to his forebears’ struggle simply to survive. Nonetheless it is real and indicative of where so many African Americans find themselves today, according to the playwright. The whole thing is made even more interesting by an underlying theme, having to do with the space-time continuum, a subject which Lewis has examined in his book. “Can we define the present moment without the past?” he asks his students, and yet that is exactly what he has been trying to do throughout his life.

It is a fascinating problem, whether you are dealing with mathematics or personal history but don’t look for it to be solved on the Berkeley Rep stage. Although the ghosts of his past manage to heighten Lewis’ awareness of his identity, it is left unclear as to what kind of difference, if any, that will make in his life. The play just ends, as if the author did not know where to go next. Whether that is a weakness or just a reflection of real life, is another question left for us to ponder.