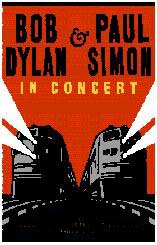 The first thing you see as you squeeze by the ticket booth is a guy standing outside holding a huge sign which says:

"Cool," says one gray-beard to his friend in relaxed-fit jeans. "Are those bands?" We all head to our seats. The first line we hear from Bob Dylan answers the guy with the sign:

"That’s The Times They Are A-Changin’! Wow! We raise our arms and cheer wildly. Everybody roars each time they hear one of Dylan’s priceless, ageless lyrics. He’s dressed in a kind of rockabilly outfit that only he would wear. Bob’s grown up and gray now, but when he utters a familiar iconic line like "Lay lady lay, lay across my big brass bed," the audience goes mad.

Of course, the other reason we cheer is it means we’ve recognized something. Bob really can’t sing anymore. He has abandoned all his melodies, and when I say all I mean all. And of course he’s always mumbled like he’s just had periodontal surgery so you can’t understand very many words he’s saying either. No melodies, few words. So the only way you’ll know what song he’s singing is to guess, until you finally recognize a phrase like "Don’t think twice, it’s all right." Then you remember how much you used to love both Dylan’s and Peter, Paul and Mary’s versions of that wonderful song, back when you and the melody were still young and recognizable. So you clap like a crazy fool.

Bob performs a full set, and then is joined by Paul Simon for the Simon and Dylanfunkel segment. He and Simon do several cool duets together, starting with The Sounds of Silence, and segueing into two classic country songs, Johnny Cash’s I Walk The Line, and Bill Munro’s Blue Moon of Kentucky. Their last song is a very spirited version of Dylan’s Knockin’ On Heaven’s Door, and then Simon grabs the mike and says "We’ll resume," and they clear the stage.

Bob Dylan is a cultural icon, the voice of a generation. That that voice is practically stilled doesn’t really mean all that much. The rush from seeing and hearing him is real. But Paul Simon is another matter entirely. In the first place Simon can sing well, he can play guitar really well, and he has an eleven-piece band anchored by legendary drummer Steve Gadd and amazing Camaroon guitarist Vincent Nguini. The band absolutely smokes. Simon has the courage to come out and do Artie’s song Bridge Over Troubled Water first. Once he gets that one over with the rest of the set explodes. Songs from Graceland and Rhythm of the Saints are probably peaks because in these songs the West African tinged band can show itself to perfection. A highlight is the triple percussion solo (Gadd, Jamey Haddad, Steve Shehan) on Diamonds on the Soles of Her Shoes. Perhaps the only quibble with the whole show occurs during the next song, the otherwise fabulous You Can CallMe Al, set over the hottest horn-edged groove we’ve heard in years. But for those who were looking forward to the famous pennywhistle solo from the record, hearing it approximated on synthesizer is a disappointment.

That is a tiny nitpick. There are no others. By the time Simon does his final encore, Still Crazy After All These Years, we realize this song has become in many ways the strange signature of his adventuresome solo career. Simon has filled us with everything amazing songwriting can offer: tenderness, fire, intelligence, and soul. He is a joy to hear.