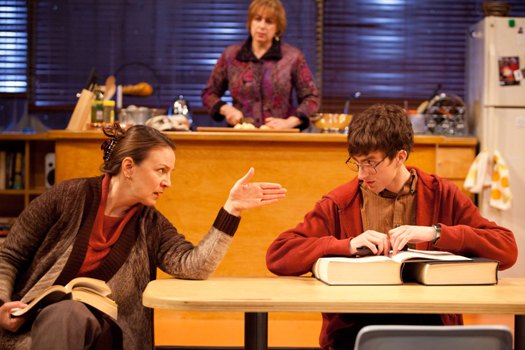 The tragic dimensions of the Polish Holocaust drama, “Our Class,” still linger from the Wilma Theater’s season opener. In contrast, with the poster art for the current production, Annie Baker’s “Body Awareness”— a nude Barbie doll in a tea cup— you get the sense that they were going for comic relief a la John Waters. Baker, Obie–winning playwright (“Circle Mirror Transformation,” “The Aliens”) in fact laces large doses of humor in this play, but also tender pathos in a multi-character study about self-identity, gender roles, straight-male bonding and a lesbian relationship that is so naturalized and true.

Phyllis (Grace Gonglewski), a psychologist and teacher, is orchestrating “Body Awareness” week at a Shirley State College in Vermont with workshops on self-esteem, gender hypocrisies broken up with dance and puppet performances to dramatize. Phyllis shares her life with Joyce (Mary Martello), a high school teacher and devoted mother to her 21- year old son, Jared (Dustin Ingram). Jared cannot cope with living on his own, hold a job and/or start dating because he probably has Asperger’s syndrome, which makes him socially un-empathetic.

Jared has a grunt job at McDonald’s but spends most of his time fantasying about sex, racking up porn-site bills, threatening to become violent (he identifies with Raskolnikov in “Crime and Punishment” and he’s astounded that his mother has never read it.) But mostly he reads the Oxford English Dictionary with the aspiration of becoming an etymologist.

There is thorny, but cozy zaniness in this remote Vermont house, but that is upended when a visiting art photographer, Frank, visits while his exhibition of nude female photos are on display at Shirley. He is a post-hippie artist who just wants to work and relate well with others. Phyllis is suspicious that he is exploiting women professionally and she even accuses Joyce of flirting with him. The women start to fight, Jared acts out even more and “Body Awareness” week is toast.

Baker knows how to write big, fat, situational jokes that you don’t see coming a mile away, but even more impressive, she writes character humor full of wit and social insight. Anne Kauffman directed the hit “Becky Shaw” two years ago, but here far surpasses working with a less formulaic play and rich characters. Unlike the previous play, there are no brittle devices in “Body Awareness.” Kauffman lets the ideas, dialogue and characters in these scenes breathe. She is also working with a fine quartet of actors. Christopher Coucill plays Frank the photographer as an understated foil. Martello, who is such a great song-and-dance woman at the Arden and Walnut Street theaters, makes Joyce unpredictable, vulnerable, smart and steeled all at once. Gonglewski, following up her powerful performances in “August, Osage County” last year, is pitch perfect again.

Eyes downcast, fidgety, bolting through the rooms, but electric from every angle is Dustin Ingram’s volcanic performance as Jared. This is a complex role with characteristics of a psychological syndrome that can’t be nailed down, and Ingram not only makes you believe every second of it, he does also it with so much heart and intelligence that it is indelible. The great set by Mimi Lien gets the sense of space and claustrophobia, and Thom Weaver’s lighting design catches the silence of that Vermont snowfall.