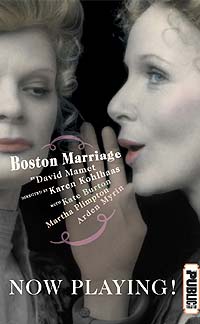 As his fondness for magician Ricky Jay (among other things) reveals, David Mamet loves tricks and puzzles. Consider the mysterious titles of some of his best known plays: Oleanna, Speed-the-Plow, The Cryptogram. So it isn’t surprising that his latest play, Boston Marriage (now receiving its New York premiere) is not necessarily set in Boston (no specific location is indicated in the program or the text), nor is the legal state of marriage at all possible for its main characters who are lesbians. Then, there are the puzzles of subject matter and style: the playwright has seemingly abandoned his familiar dramatic turf where vulgar, grasping, desperate men struggle with each other and their culture to survive. In his most characteristic plays– American Buffalo, Glengarry Glen Ross, Speed-the-Plow— commerce and criminality are irrevocably linked as the male animals claw savagely for their place in the sun.

What have we here? No grubby junk shop, no frenzied real estate firm, no tacky Hollywood rhinestone elegance, but the stylized distillation of a refined upper-class drawing room circa 1900, peopled by two fashionable upper-class women and one servant– not a man in sight! This is the mannered world of Wilde, Maugham, Coward, and their forebears Congreve and Wycherley. Has Mamet chosen to display his versatility and disprove the canard that his macho considerations preclude an understanding of women? Can he pull off the Martin Scorcese gilded-age illusion wherein the master of contemporary urban violence turns smarmy goodfellows into Edith Wharton Innocents?

The eponymous "Boston marriage" (derived from Henry James’s The Bostonians) referred to middle or upper-class women–often intellectuals, artists, or feminists–who, by dint of independent incomes or careers, lived together intimately without men. To what extent these relationships were explicitly sexual is debatable. Obviously, some were and some weren’t, but the participants were clearly dependent upon each other for emotional support. It was not only a Victorian phenomenon. Mary Wollstonecraft, in the late 18th century, hoped for a friendship with a woman as consuming as any heterosexual love affair.

There is no sexual ambiguity in this play, however. Mamet’s protagonists, Claire and Anna, explicitly voice their sensual desires. Indeed, the engine of the plot jump-starts on Claire’s request that Anna play a beard to cover the seduction of a young, nubile adolescent girl. Let’s back up: Anna has wheedled support for this unconventional household from a deluded newly acquired "male protector." But with her Boston marriage with Claire in deep trouble; she accedes to the seduction request. The best laid plans come aground when a necklace Anna has given Claire is recognized by the girl as one that belongs to her own mother! In short, her father is Anna’s protector.

These Congrevian complications are the grist of sophisticated comic intrigue. But the play is no mere exercise in comedy of manners. That something more subtly ambitious is at work here can be discerned when one recognizes a radical conjoining of discourses: an essentially decorous, sonorous, archaic Victorian discourse ("reticule," "rodomontade") is intercut with an explicitly vulgar argot ("You have fucked my life into a cocked hat.") The tension between old and new discourse is clearly intentional. One is reminded how the controversial Oleanna fastened finally not on the "facts" of sexual harassment but on the question of how discourse empowers the initially inarticulate Carol.

Mamet may have changed bottles but the wine remains the same. People–yes, women as well as men–will claw and lacerate. "You are brutal," says Claire to Anna, and so she is, but Claire cannot see the cruel egoism of forcing Anna’s complicity in her own cuckoldry. As intensely as any male contenders, the women protagonists in this play verbally excoriate each other as they jockey for dominance in their relationship. "Every note you strike is false," accuses Claire, "I cannot assemble them into a rational composition."As lightning-rod and convenient target for their growing frustrations they turn towards their Scottish maid. Despite the girl’s repeated protestations, Anna keeps insisting that she is dim-witted and Irish, a misunderstanding that is dramatically hilarious but extremely painful in its naked display of class privilege.

So Boston Marriage is not so very different from Mamet’s other plays after all. Like many another Mamet piece it is written in three economical, brittle scenes in which dialogue is stripped to its essentials around a dynamic throughline. However historicized and formalized, the dramatic world exposed here is one in which the marginalized fight with bravado a system that represses them. The women in Boston Marriage live on society’s fringe as they struggle to maintain an unaccepted love relationship.The shifts, the sacrifices, the jealousies and duplicities revealed are exacerbated by the couple’s outlaw status, but Mamet implies that they are the inevitable result of any long-surviving "unity of two."

One wonders to what extent the present Public Theater production aids the play’s elucidation. Kate Burton, Martha Plimpton, and Arden Myrin as the two lovers and their servant give stalwart performances that command attention. But they are pitched, from the very outset, at such high levels of stylization that reality of character and situation have to struggle to make themselves felt. It is a tribute to the actors involved that we do come to believe in them. But perhaps some middle ground could have been found to make the task easier. Director Karen Kohlhaas, who indeed found such a style in her excellent production of The Water Engine at the Atlentic Theater, never here quite succeeds in defining the bone beneath the skin of the play. In the best high comedy the way of the world is never merely witty or frivolous; it sparkles because it’s hard.