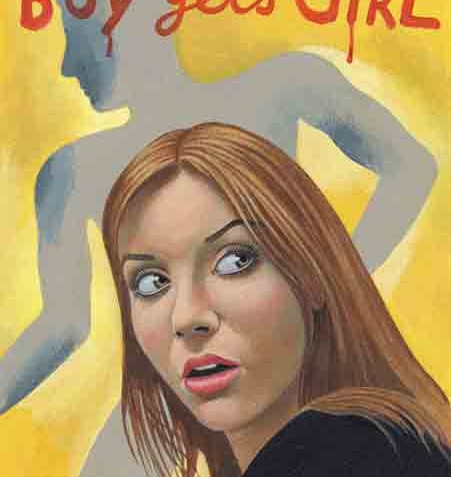 Boy Gets Girl shifts from what could pass for slick dialogue on an episode of Sex and the City to a modern tragedy, something like a contemporary Daphne DeMaurier creation. No question, this is a good story, both entertaining and thought provoking.

Theresa Bedell (Nancy Travis) is a late thirties, attractive, hard-driving, hard-biting writer at The World,a thinly disguised New Yorker, magazine. Her co-workers are Howard Siegel (Charles Jansz), her fuddy-duddy, divorced editor, who takes an almost fatherly interest in her; Mercer Stevens (Taylor Nichols), another writer, whom she calls &#147;the new guy,&#148; even though they have worked together closely for three months; and Harriet (Julie Ann Emery) perhaps the most ditsy secretary ever to be seen on a serious stage.

The play opens in a bar, an edgy Theresa meeting Tony (Mark Deakins) for a blind date.They have been fixed up by a friend … just for a beer. She exudes smarts–street smarts, book smarts. Her language is punctuated by references to writers like William Dean Howells and the Alcotts. Tony has a certain good looking, awkward charm, humble about not knowing what she knows but eager to please her. Their exchanges are fast paced. No one watching thinks she will really fall for this guy, but on the other hand, it is kind of nice that she does agree to go out on a real date with him. He seems so interested and she has not dated since she broke up with her boyfriend over a year before.It might be nice for each of them just to have a date.

Tony is a bit too sticky when next they meet at a restaurant.Theresa firmly sets her boundaries with him. No he can not take her home, nor have her home phone number. He is awfully dense.Richard Woodbury’s background music becomes progressively more ominous between the many scene changes (too many scene changes). Interesting music, but must it be so obvious where this is going? The set, by Andrew Jackness, is a slick background that can be accessorized as an office, a restaurant, or a hotel lobby. But the many changes are more fitting for television or the movies. Continuity is repeatedly broken.

As Tony becomes progressively more insistent, sending flowers to her office, leaving sinister messages on her office voice mail, she wonders aloud &#147;I think I may be being followed.&#148; Watching, it’s hard not to wonder: If she is so smart, why it is taking her so long to call the police.These kinds of errors recur repeatedly in the script. It interferes with the suspension of disbelief and undermines the growing suspense.

Theresa&#146;s life becomes increasingly constrained as the threats escalate. At first she resists when the police woman (Monnae Michaell) gives her the standard police protocol–Theresa should change her unlisted phone number, stay somewhere else, and if it does not stop, change her name and move to another city. This is not for a writer with a known by-line, not for an experienced New York woman like Theresa. He is stealing her life without laying a finger on her.

Gilman was inspired to write Boy Gets Girl by an article about stalking that appeared in the New York Times; the police recommendations come straight from the sidebar to that story. It is not hard to identify with Theresa&#146;s panic and anger as the stalker robs her of her peace of mind. This is a story that could easily happen, has undoubtedly happened. What is interesting is how she projects her anger onto all men and how the two men in the office at first see Tony as some guy who is just smitten with her, sending flowers, leaving messages. Slowly they get it when she plays them a voice mail. Men may be dense, in the view of many women, but this is a little too dense.

The blurred line between normal behavior and criminal behavior is interesting ground to explore. The projection of Theresa&#146;s anger onto the men around her is real, a predictable reaction of a rape victim or a woman who has been so menacingly stalked. Gilman, however, trusts her audience too little. She explains too much.Live theater audiences are accustomed to having less explained. The naivete of such sophisticated characters serves to distance the viewer from the terror.

The time is the present but much of Theresa&#146;s feminism is more reminiscent of the &#145;70&#146;s. Her statement that on her daily run in the park men will frequently yell that they &#147;want to fuck her in the ass&#148; suggests exaggeration or that she ought to find another place to run. The line between blaming the victim and common sense is not explored.Harriet, the secretary, reeks "Valley Girl." It is doubtful that a young woman today is speaking that way. The men in the office shift from male chauvinist pigs to sensitive and incredibly insightful.

The play belongs to Theresa and to Nancy Travis. Travis exudes the confidence of the professional woman who has hit her stride. Her lines are wonderful and Travis delivers them with authority, while conveying the vulnerability of a character who keeps the world at bay by being a workaholic. She alone is worth the journey. James Farentino also gives a brief but unforgettable performance as a slimy porn film producer.He has become a cult figure in the artsy world and Theresa is given an assignment to interview him. In the one part that is written with welcome brevity, Farentino exudes aging slime.

Where the writing in Boy Gets Girl is terse, it has style and pacing What are lacking overall are subtlety and editing–it’s almost two and a half hours long. DeMaurier and Hitchcock got it right.Gilman needs to learn.