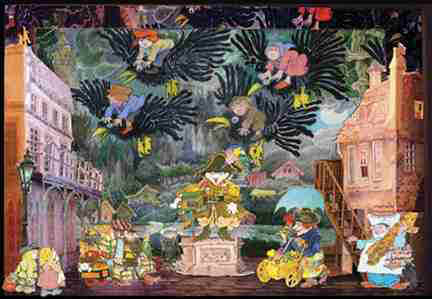 The fact that Brundibar rhymes with "wunderbar" may be a coincidence but it&#146;s pretty close to the truth. Berkeley Rep&#146;s new million dollar baby, mounted in collaboration with Yale Repertory Theatre, is, like most babies, perfectly adorable. Much of that is due to the whimsical production design of legendary children&#146;s author Maurice Sendak (with Kris Stone) and much to the talented ensemble of local kids (and the two young imported leads) who carry the show. Brundibar is a stage adaptation of a 2003 children&#146;s book by Sendak and famed playwright Tony Kushner (Angels in America, Caroline, or Change.) In this production, directed by Berkeley Rep Artistic Director Tony Taccone, Kushner has adapted his story into the libretto of a mini-opera.

But the real story of Brundibar began before Kushner was even born and is even more exciting and poignant than the one on the stage. In 1938 a Czech composer named Hans Krasa composed a short children&#146;s opera that, on the eve of the Nazi takeover, demonstrated the triumph of innocence and good over corruption and evil. The original libretto was by Adolph Hoffmeister. After the outbreak of war, the opera was shelved because of its composer&#146;s Jewish origins and was not premiered until 1942 when the Vinohrady Jewish boy&#146;s orphanage put on three performances, conducted by Rudolph Freudenfeld, the teenaged son of the orphanage director.

Shortly after that premier, the young conductor, his father and several others connected with the production, as well as the boys of the orphanage, were transported to the concentration camp of Terezin (Theriesenstadt) a few miles outside of Prague. Terezin was the Nazi&#146;s "model" camp, housing many intellectuals, artists and musicians as a kind of way station to the extermination centers of Auschwitz and Buchenwald. Composer Krasa was already there, serving as director of music for the other inmates. Young Freudenfeld had smuggled the piano score of the opera out in his suitcase and Krasa re-orchestrated it. Subsequently, Brundibar was performed more than fifty times by the children of the camp for the entertainment, not only of the other prisoners, but for an International Red Cross representative. Segments of the production were included in a Nazi propaganda film. Propaganda aside, the truth is that almost the entire production team, the conductor and composer and the majority of the young performers ultimately perished in the Auschwitz gas chambers.

The stage story is much simpler and much more upbeat. Two little children, Pepicek (Aaron Simon Gross) and Aninku (Devynn Pedell) go to the market square, desperately seeking milk for their sick mother. They have no money but they notice that a tall organ grinder (the Brundibar of the title, played by Euan Morton) is raking in the cash. When the two children try similarly to sing for their supper the mean organ grinder runs them off, aided by a cop and the local landlord. As the frightened and exhausted children settle down in an alleyway to get some sleep they are visited by a talking &#150; or rather, singing &#150; sparrow, cat and dog (Anjali Bhimani, Angelina Reaux and Geoff Hoyle, respectively) who hatch a plot to bring Brundibar down. With the aid of a host of schoolchildren, they do just that &#150; raising the milk money along the way. The opera ends triumphantly except for a coda in which the villain, in the way of all tyrants, warns that he will be back.

The stage Brundibar is remarkably faithful to the book. The production values are impeccable, the voices are fine and the sets will knock your socks off, even if you are not already a Sendak fan (and what parent or grandparent isn&#146;t?) Members of the Berkeley Symphony provide fine accompaniment and a good time is had by all.

Would that the same could be said for Comedy on the Bridge, the curtain raiser. Another Sendak-Kushner collaboration, this time with music by Bohuslav Martinu, a much better-known composer than Krasa, it&#146;s an absurdist farce about five people, stuck on a bridge between two opposing armies. Four of them are jealously obsessing about their love lives and the fifth, a schoolteacher (William Youmans) worrying over an unsolved riddle. Many of the same adult performers of Brundibar appear in the various roles with the children&#146;s chorus marching across the stage as the liberating army. Matt Farnsworth, who plays the Milkman in Brundibar, is a country bumpkin here with the best voice and most engaging manner of the entire bunch. Nevertheless, again, the Sendak set design is the real star of the show.

Comedy on the Bridge is a satirical anti-war statement and, as such, seems to be an appropriate companion piece to Brundibar. Trouble is, it isn&#146;t terribly tuneful or very funny and Kushner&#146;s libretto contains some language and situations that may make parents, who have brought their little ones to see Brundibar, want to cover their innocent ears.