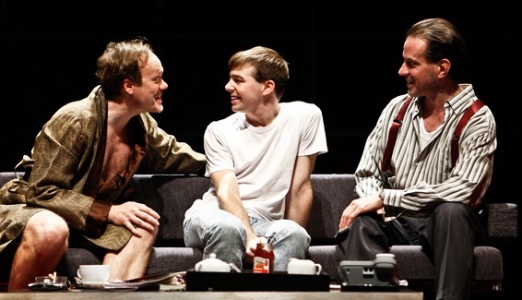 It’s kinky season in New York theater. While on Broadway David Ives’s “Venus in Fur” takes its text from Leopold von Sacher-Masoch’s famous novel, Off-Broadway Thomas Bradshaw’s “Burning” pays homage to the other side of the sado-masochistic hyphen. Several of his characters pass around the Marquis de Sade’s “The Philosophy of the Bedroom” and not only discuss but live out the book’s ideas about following one’s natural desires. Like Sade’s 1795 dramatic dialogue, Bradshaw’s play parades the most outrageous, provocative sexual shenanigans as if they are the most normal, reasonable activities in the world.

One reels out of the theater afterward mentally cataloguing the array of frankly sexual scenes, staged by Scott Elliott with his usual relish for flagrant displays of gratuitous nudity. Did I just watch a neo-Nazi jerk off his quadriplegic sister in the bathtub? Was I dreaming, or did that 14-year-old boy walk in on two grown men fucking and accept an invitation to join the action? Is it true that I witnessed another adult rim and fuck the same naked boy on his sofa? And if I’m not mistaken, that black artist (married to a white woman) had an epiphany about his racial identity while having anal sex with an African prostitute in a Berlin brothel. And (to quote Stephen Sondheim) wait, I’m just beginning!

The 30-year-old author of ten plays (including “Strom Thurmond Is Not a Racist”), Bradshaw does not, I think, set out primarily to shock, although shock he does. (I’m a pretty cool customer, but like the rest of the audience I squirmed silently while the aforementioned boy perched on the lap of one of his adopted daddies making out with him while his other daddy sat next to them, reading the paper and smiling indulgently.) The playwright’s remarkable accomplishment is to build a clear-eyed contemporary narrative that is as matter-of-fact about sex, drugs, and violence as it is about death, art, and politics. And he does so in a way that makes other playwrights look coy, cowardly, or faint-hearted.

“Burning” intricately interweaves three different stories, each of which starts with a dead mother. When his mother overdoses, precocious Chris (Evan Johnson, young-looking but a college graduate!) flies from San Francisco to audition for Jack (Andrew Garman), an actor and teacher who takes the 14-year-old orphan home to live with him and his partner, Simon (Danny Mastrogiorgio), a director. To bury his mother, another drug casualty, teenage Franklin (Vladimir Versailles) turns for financial help to his Uncle Peter (Stephen Tyrone Williams), an increasingly successful African-American painter who prefers to prefer to hide his race whenever possible, lest he be accused of benefiting from affirmative action. Berliners Michael (Drew Hildebrand) and Katrin (Reyna de Courcy) lost their parents in the same car accident that left Katrin confined to a wheelchair, which doesn’t stop her from honoring her parents by carrying on their regular readings of “Mein Kampf” with like-minded devotees of die Führer. When Peter gets a show at a prestigious gallery in Berlin, it so happens that the dealer Paul (Jeff Biehl) employs Michael as an assistant and introduces the artist to the pleasure of anal sex with prostitutes, which is how he meets and falls for a Sudanese refugee who calls herself Gretchen (Barrett Doss). And Peter’s white English wife, Josephine (Larisa Polonsky), turns out to be the half-sister of Chris, who has grown up to be a certifiably bad actor (played by Hunter Foster) and has life-changing butt-sex with Franklin. (We’re well into the play before we realize that the narrative takes place in two different time-frames, which is both sneaky and masterfully done.) I’m allergic to plots that smack of heavy contrivance, but somehow Bradshaw fits these pieces together with surprising cogency (although I’m not sure how a supposedly famous artist could have more than one show without his racial identity being known to the world). All things considered, it’s a classically well-made play. With a lot of fucking.

Bradshaw’s references to de Sade are anything but casual. Like de Sade, the playwright depicts a topsy-turvy world where kinky sex masquerades as the norm (especially the relentless glorification of anal sex), for purposes that are simultaneously humorous, dramatic, ironic (in the philosophical rather than Alanis Morissette sense), and social-critical. Unlike Neil LaBute and Adam Rapp, whose plays wallow in grim human misdoings in a way that seems pretentious and sensationalistic to me, Bradshaw steadfastly refrains from commenting on his characters’ behavior. Everything his characters do make perfect sense to them. What you make of it, he leaves up to you. And the play isn’t any kind of naturalistic documentary “about” pedophilia or drugs or racism. It is both highly stylized and deeply truthful in its adherence to ancient Roman playwright Terence’s famous dictum “Nothing human is alien to me.”

The blunt, unflinching, episodic nature of the play harks back in some ways to Buchner and Wedekind and in some ways to Brecht. Somehow I wouldn’t be surprised if Bradshaw had an early imprinting encounter with Wallace Shawn’s startlingly original, more-read-than-seen “A Thought in Three Parts,” whose middle section (“Youth Hostel”) is the only other play I know of that depicts such a gleeful plethora of onstage sex acts. But more than anything else, “Burning” and the two other Bradshaw plays I’m familiar with, “The Bereaved” and “Mary,” seem like the work of a hard-core comic-book aficionado. They alternate between stripped-down action scenes and loopy digressions — “Burning” spends a lot of time ruminating about Strindberg’s play “The Father” and surveying the various price-points for coffins — in a way that is recognizable to fans of (extremely) graphic novels.

The performances are simple, unshowy, unremarkable. It’s hard to tell if that’s because better actors refused to play roles that require so much nudity and carefully staged sexual romping, or if it’s because Bradshaw belongs to the Richard Maxwell neo-Brechtian school that prizes acting that looks like non-acting. Elliott’s production has been hugely controversial among theater people. Some feel he betrays the play by ladling on heaps of treacly-sincere 1970s pop music between scenes (Elton John’s “Your Song” is a running theme). I didn’t feel that way myself — grotesque and campy as it may be, I have to believe that when Diana Ross sang “A Corner of the Sky” from “Pippin” she meant every word of it.

It’s hard to say “Gee, I liked this play” or “You should go see it.” But it has been a long time since a new play made such an impression on me and kept me thinking about it for weeks.