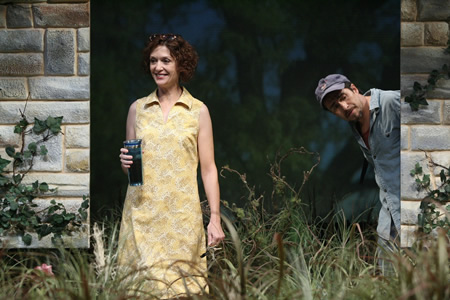 By the Waters of Babylon

With Demian Bichir and Shannon Cochran

My mother always told me to find something nice to say. OK, I will try. Michael Ganio did a real neat job of converting the Geffen stage into an overgrown yard choked with two-foot tall grasses. Neat, that is, until Demian Bichir, Arturo the hired man/gardener, started to clear the weeds in recently widowed Catherine’s (Shannon Cochran) Austin Texas garden and the mess miraculously receded on little tracks by itself.

Catherine is a lonely, youthful looking widow in a shapeless housedress and willing to speak to anyone who will listen even if the only way she can communicate is in her very broken Spanish. Lucky for her, and lucky for us, the great looking guy she picked up at the local corner day-labor market points out that his English is better than her Spanish. Really lucky for us as the next hour and fifty minutes is filled with their talking to, or in many cases, at each other. It is a two-person play.

It seems playwright Robert Schenkkan thought that D. H. Lawrence had not fully explored the-gardener-beds-the-lady-in-the-big-house theme. That is not really giving away the plot. It is doubtful that anyone in the audience missed the trajectory of the story unless they were sleeping, as were the two people sitting next to me. But that is not completely fair, By The Waters of Babylon, was not quite as bad as watching grass grow. Recall, rather than growing, the grass moved itself conveniently to the sides of the stage revealing an old bench the actors could sit on. Almost two hours is a long time to be on your feet.

Although Latin American actor, Damian Bichir, did not work up much of a sweat (after all, the grass pretty much cleared itself), he did bring to life the character of Arturo, a Cuban boat person who had been a writer in his native land, at odds with all his government stands for, but homesick for the soul of Cuba. He cannot be blamed for the overly coy occasional misinterpretations of English written by Schenkkan. Nor, I suspect, can Obie winning actress Shannon Cochran be blamed for needy Catherine’s strange combination of New York style zingers delivered in a rapid southern drawl. Early on she quotes her dead professor husband as having said that the garden was “vibrant with no particular purpose, just like (her).” It could have been an igniting line; the audience response was mild and as the play progressed, clever lines or phrases elicited little or no response.

Lubricated by alcohol, which Catherine liberally offers, each opens up to the other their dark sides and their demons. Normally, when people open up to one another there is visible chemistry. They themselves feel it and so can any observer. I failed to see the chemistry. Even her finally telling the history of having been abused and her ultimate revenge, which I will not reveal, aroused no empathy. No more details; I have told enough, and if you are going to see it there are few enough surprises; I do not want to be the one who ruins them.

What does the title refer to here? Each admires the Cuban author, Gabriel Garcia Marquez, who is known for his tales of magical realism. Taking a leaf from Marquez’ genre, Arturo creates for himself and Catherine a scene of metaphorical cleansing in the ocean waters and the stage magically is transformed into the healing seaside. In psychology we would call it guided imagery, but one has to be in an almost hypnotic state for it to have an effect. Few will be transported there by The Waters of Babylon.

Back to my mother: she was kind of old fashioned. She would have liked me to close with something nice too. Once again the set gets the Kudos. Ganio has created a warm and inviting bedroom for the sex scene, which unfortunately must have happened during intermission. I especially liked the rich brown sheets.