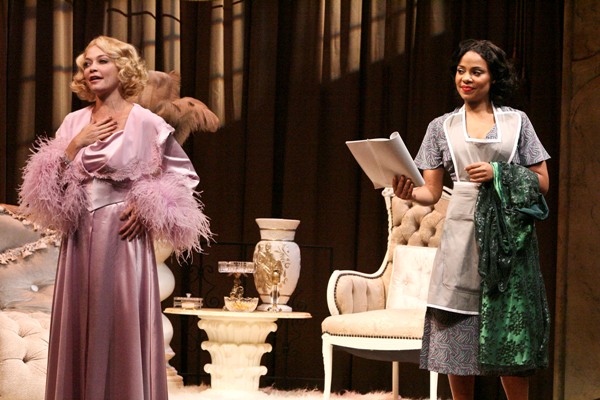 Amanda Detmer (left) and Sanaa Lathan in the Geffen’s “By the Way, Meet Vera Stark”
Photo by Michael Lamont

‘By the Way, Meet Vera Stark’

You could be forgiven if you were to go into the Geffen Playhouse wanting — expecting is more like it— “By The Way, Have You Met Vera Stark” to be a rare treat. Playwright Lynn Nottage has a MacArthur Genius Grant, a Pulitzer, an Obie … the list goes on. Her Pulitzer-winning “Ruined,” also seen at the Geffen several seasons ago, was a fully realized, touching, entertaining, richly detailed piece of theater. It colorfully laid bare the brutality of life in a Congolese brothel with fleshed-out characters and relationships, yet without preaching or hitting the audience over the head with a hammer. Of course it was a winner.

So who is this “Vera Stark” anyway? She is Nottage’s fictionalized depiction of Therese Harris, a black actress in 1930s Hollywood who symbolizes the overt discrimination faced by blacks in the industry, the echoes of which are still present in more places than Hollywood. The real Harris played opposite Barbara Stanwyck in “Baby Face,” and with Marlene Dietrich in “The Flame of New Orleans.” Always cast as a servant or slave (the only roles that a black actor could aspire to), Harris caught Nottage’s attention because her roles were fuller than the usual “yes ma’am” and “no sir” usually doled out to black actors. She was beautiful, she was sexy, and, in these two films, her role was not strictly subservient. Little is known of these early black actors, so Nottage has created a fictionalized history. If you are obsessive, she has even created a fictionalized documentary about Vera — should we say mockumentary? — and you can catch it online. In some ways it is much more subtle and better than the actual play.

Act I is set in 1933. Vera (Sanaa Lathan), the real-life maid of lightweight starlet and “America’s Sweetie-pie,” Gloria Mitchell (Amanda Detmer), is attempting to help the sloshed starlet rehearse her lines for an audition. The movie will be about a prostitute in a brothel and includes her maid. Vera is an aspiring actress, too; this maid’s part has more lines than are usually offered a servant, and she hopes somehow to be noticed. Mitchell’s apartment is all satin and ostrich feathers – old style Hollywood glamour. When Vera goes home to her two roommates, also aspiring black actresses, the contrast is stark working class digs. The three black women are supportive and competitive with one another, all in one breath. Willowy Anna Mae (Merle Dandridge) is dressed as sexily as Mitchell was in the opening scene because Anna Mae has a date with a director in a Duesenberg. She, too, has aspirations. She is passing as Brazilian to broaden her opportunities. Lottie (Kimberly Hebert Gregory), the mammy-proportioned third roommate, comments, “you have to be high yellow mellow” to make it in this town.

Back again in the starlet’s house, Mitchell is giving a soiree to seduce the director into giving her the lead. It is clear she has slept her way into much of her career. She has told Vera to get extra help to impress him. Vera brings Lottie, who is happy to get a little closer to the Hollywood action, and take a nip or two from the ample bar. Mitchell is barely holding it together when in walks director Maximillion Von Oster (Mather Zickel) with none other than Lottie on his arm. The plot thickens and so does the competition between all four women.

Act II is set in 2003. It is an academic forum discussing the trajectory and meaning of Vera Stark’s life and career. Moderator and black history maven Herb Forester (Kevin T. Carroll) is joined by two women panelists: women’s studies professor Carmen Levy-Green (also played by Kimberly Hebert Gregory), and Afua Assate Ejobo (Merle Dandridge again) a lesbian activist with a full head of maroon afro braids who oozes tough from every pore. To illustrate his points, and to dial down the tension between the two women, the moderator turns to a video of a 1973 TV interview which was the last known sighting of Vera Stark (acted out on a higher stage). The TV host, Brad Donovan (Spencer Garrett) is generic smooth; Vera is tipsy, dressed in the epitome of bad 1970s taste. Every time things start to heat up between the two women panelists, Forester switches to the TV interview or clips from Vera’s best known film, “The Belle of New Orleans.” Filmmaker Tony Gerber has done an excellent job of recreating the feel of a 1930s potboiler.

The two acts are in stark contrast. For one thing, Act I is unmiked to create the feeling of intimacy; the women speak in high-pitched voices that are probably meant to conjure up the quality of sound of the period; not so successful — unless, maybe, you are on top of the stage. Act II is highly miked to create the atmosphere of TV and the feel of a panel in front of an auditorium. The actors are caricatures, whether or not they are supposed to be acting. Rather than parody, in the first act it is uncomfortably close to the obnoxious stereotypes of the era. Act II is somewhat more successful. From the vapid TV celebrity interview to the over-puffed, pretentious academic analysis of popular culture, the points are effectively made.

“Vera Stark” is a complex piece to produce, combining stage with a serious proportion of film re-creation. From that standpoint Jo Bonney’s direction is very successful. Her choice of an exaggerated contrast between miked and unmiked is much less so. But the serious criticism lies at Nottage’s feet. The film “Baby Face” that first attracted her to the actress Theresa Harris clearly laid the groundwork for the mixed relationship between the white star and her maid. “Vera Stark” could have explored that; instead Vera refers in passing to their having had a previous more equal relationship in vaudeville but it is a toss-off, not a well-developed plot line. “Vera Stark” tries too hard to amuse and in the process comes close to crossing the line and insulting the black actors themselves.

Not everything produced by a certified “genius,” be it artistic or scientific or whatever, is going to be genius quality. No matter how much one hoped, unfortunately “Vera Stark” is not in the same category as “Ruined.” Complex, well-researched, meaningful— yes. But “Vera Stark” tries so hard to be entertaining it ends up as much a caricature as the figures of African Americans have been on the stage and screen.

(18197)
$6.99 (as of January 26, 2021 - More infoProduct prices and availability are accurate as of the date/time indicated and are subject to change. Any price and availability information displayed on [relevant Amazon Site(s), as applicable] at the time of purchase will apply to the purchase of this product.)

(27678)
$9.99 (as of January 26, 2021 - More infoProduct prices and availability are accurate as of the date/time indicated and are subject to change. Any price and availability information displayed on [relevant Amazon Site(s), as applicable] at the time of purchase will apply to the purchase of this product.)

(9225)
$6.43 (as of January 26, 2021 - More infoProduct prices and availability are accurate as of the date/time indicated and are subject to change. Any price and availability information displayed on [relevant Amazon Site(s), as applicable] at the time of purchase will apply to the purchase of this product.)
related posts