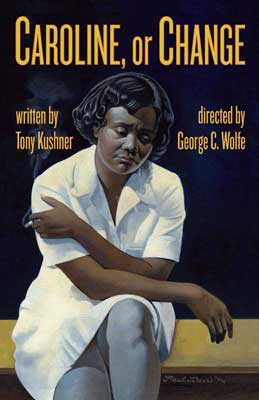 Caroline, or Change is a memory play from Tony Kushner, originally planned as an opera, but morphed into a contemporary musical by composer Jeanine Tesori (Thoroughly Modern Millie). Kushner’s Angels in America set a standard for intelligence, thoughfulness and theatrical wizardry that colors expectations for a new work from him. Credit Caroline for both intelligence and thoughtfulness, gifts never to be undervalued in the more often than not vacuous offerings of the Broadway musical theater.

The setting is Lake Charles, the small town in western Lousiana where Kushner grew up, in 1963 when he was eight years old. In the play, the character is Noah Gellman (Benjamin Platt), an unhappy child whose mother has died and whose father (David Constable) remains withdrawn into mourning, even after having remarried a woman from New York, Rose (Veanne Cox), providing Noah with a stepmother. "She’s nice to me," he sings, "I hate her with all my heart."

So Noah’s most supportive relationship is with the family’s black maid, Caroline (Tonya Perkins), and Kushner makes Caroline the center of the story. The worldly, middle-class Jewish family culture contrasts with the poor southern black culture and both are set against the historical upheavals of the period. Kushner makes singing characters out of the washing machine, the dryer, and the radio in the laundry room of the Gellman home, a clever device to provide outside commentary within the confines of Caroline’s world. There’s even an anthropomorphized bus (Chuck Cooper) that sings a moving lament for John F. Kennedy after the assassination. (At one point Caroline’s eldest son is mentioned as being away in Viet Nam, though that isn’t developed at all and seems included only as further evocation of the period.)

Caroline’s somewhat conservative leanings are contrasted with the ambitions of her friend Dotty (Paula Newsome) who is going to night school to improve her position in the world and is caught up in the civil rights movement; Caroline is accused of being "Miss Piety and Rectitude." Other changes, big and small, are noted–the home with only a radio at a time when television was wending its way into every American household, the shift of language from "Negro" to "black."

Kushner carries the idea of change into a somewhat forced play on words, turning his plot on the pocket change that Noah leaves in his trousers. Frugal Rose tells Noah and Caroline that Caroline should keep the change Noah leaves in his pockets when she finds it in the laundry. Caroline objects, consciously out of her strong sense of honesty, but there’s also a sense of being demeaned by Rose’s patronizing, if well intentioned rule. Kushner has Noah accidentally leave a $20 bill, a Chanukah gift, in his pocket, and makes the resultant incident a critical turn for Caroline. It seems an especially thin straw to break this camel’s back.

The weakness in the book is its lack of conflict–there’s no central protagonist/antagonist contention to provide needed energizing theatrical tension. What tension there is is within Caroline–22 years a domestic, deserted by an abusive husband, fighting to sustain her dignity, acutely aware she needs to hold her job in order to feed her three kids. The pocket change plot device is not strong enough and almost trivializes the depth of Caroline’s internal conflicts. The latter, however, are powerfully expressed in Perkins’ riveting performance of Caroline’s big soliloquy, her passionately expressed concern that a lifetime of crushed hopes will overcome her good judgement: "Don’t let my sorrow make evil of me!" But for all its emotion, not even this aria gets into the viewer’s gut; it feels strangely distant.

Tesori’s score is a pastiche that relies heavily on ‘sixties rhythm and blues styles for energy and encompasses direct quotes from Mozart, Christmas carols and tradtional Chanukah songs. There’s the wailing minor key clarinet sound of klezmer to cover the Jewish element. The score is skillfully wrought, artfully arranged, and performed as well as can be imagined, but it falls well short of memorable and you won’t likely walk out of the theater humming. The influence of Sondheim is palpable, but without his inventiveness. At some moments, the music evokes the style of Porgy and Bess, but it lacks Gershwin’s brilliant melodic gift.

George C. Wolfe’s staging is smoothly accomplished and serves the script well; he draws faultless performances from the talented cast. Riccardo Hern�ndez’ stage design is enhanced by the lighting of Jules Fisher and Peggy Eisenhauer. A flaw is the angle of the laundry room set. In a couple of numbers, audience on the right hand side of the theater cannot see the performers who are singing.

(10518)
$8.99 (as of January 21, 2021 - More infoProduct prices and availability are accurate as of the date/time indicated and are subject to change. Any price and availability information displayed on [relevant Amazon Site(s), as applicable] at the time of purchase will apply to the purchase of this product.)

(9573)
$19.99 (as of January 21, 2021 - More infoProduct prices and availability are accurate as of the date/time indicated and are subject to change. Any price and availability information displayed on [relevant Amazon Site(s), as applicable] at the time of purchase will apply to the purchase of this product.)

(12904)
$48.99 (as of January 21, 2021 - More infoProduct prices and availability are accurate as of the date/time indicated and are subject to change. Any price and availability information displayed on [relevant Amazon Site(s), as applicable] at the time of purchase will apply to the purchase of this product.)
related posts