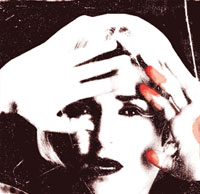 Chair consists of reflections on life and death loosely organized around the fragmented story of a female serial killer awaiting execution by electric chair. She reminisces about her crimes and the nature of human existence. Is the taking of life akin to the crime of Prometheus; a theft of the eternal flame that represents the spark of the divine?

Chair is the latest work by Operating Theatre. The company, fronted by actor Olwen Fouere (last seen in Blue Raincoat&#146;s production of Playboy of the Western World) and composer Roger Doyle (a member of the elite Irish bardic association Aosd�na), emphasizes experimental relationships between music, text, and performance. As such, Chair is more akin to "performance art" than to conventional theatre. If the goal of performance art is to stimulate the mind and provoke an intellectual response to personal, social, or emotional issues with abstract or associational imagery, then this is a successful piece. Its degree of success in the various dimensions is questionable.

The program notes and press releases foreground the polemical aspect of the work. A lengthy description of the horrors of early experiments in electric chair executions excerpted from Ted Conover&#146;s book Holding the Key is presented by way of introduction, presumably setting the tone for what is to follow on stage. On an associational level, the piece does raise moral questions about the ethics of the death penalty, not least of all in juxtaposing state sponsored murder with the more prosaic and wanton crimes of which the central character stands accused. Occasional glimpses of an outside world (a scene where she stands defiantly in court and demands to be allowed to die and avoid the show trials she is being subjected to, and a &#145;live reportage&#146; from the prison which describes the method of execution) attempt to create a context for the action which roots it in identifiable political and social realities.

The work in performance is less overtly concerned with context. Stagecraft is the primary focus. The performance space is the center of the theatre. The audience is seated on two sides. As they enter, Fouere is already in situ, lying slightly off center on a raised platform. She is dressed in a white paper costume, but because the entire set is bathed in blue light, she blends in with it. She is writhing dreamily and muttering an incomprehensible mantra. She repeats this for some time before raising her voice to a level which allows the audience to engage with what she is saying.

The platform is tiled in white with opaque panels in each corner and in the middle. There is one prop on each of the corner panels: a book, a pack of cigarettes and lighter, a pair of white boots with red heels, and a folded sheet (which we later discover contains instruments of torture and murder which also double as the straps of the electric chair). Four television monitors are placed at the edge of the performance space, which also features a washbasin, a cell door, and a drum with a microphone mounted overhead. As the show progresses, each of the props is brought into play and the monitors display a variety of images. One of the two stage walls also serves as a screen onto which selected slides and video images are projected. On the other, the control booth is visible, where Doyle (dressed in a prison guard&#146;s uniform) sits at his keyboards and provides the live score.

The script is a mixture of monologue, poetry, and reading. Fouere portrays the killer for the most part, though she also moves outside the persona from time to time to act as a kind of tour guide or narrator. The play delves into the killer&#146;s memories of the murders she has committed and her (abstract, amoral) reflections upon the life she has led.

The murders take the form of a kind of ritual which is comprised of a sexually charged dance and an exchange of dialogue about love and expectation. This ritual is initially presented without context, though it is ripe with imagery of sexuality and ambiguous emotions. Like much of what is seen, it is more a sense memory than anything as literal as a reminiscence. It is presented without literal explication and requires associational reasoning to piece it together with the other fragments of memory and meditation in the script. Fouere also reads excerpts from Shelley&#146;s Prometheus Unbound, the image of fire from which ties in with some of the dialogue spoken during the dance. Images of burning abound, from references to the literal and metaphorical desert in which she wanders at one point (spoken of in a reflective style which approximates the poetic), references to the effects of the electric chair and the double-edged exclamation "I&#146;m on fire," which she speaks while she dances.

Fouere is an accomplished physical performer, and as such this piece concentrates attention on her gestures and movements. There is a lot of deliberate repetition of specific patterns of movement around the platform and on it, all of which is carried out in conjunction with specific musical cues. The score combines &#145;mickey mousing&#146; where actions are matched to sounds and more general atmospheric and tonal composition designed to create and sustain a sense of disharmony and unease. This is the heart of what Operating Theatre are trying to accomplish on a stylistic and aesthetic level, and there is a certain fascination to it. The audience is also expected to incorporate a response to the visual materials presented throughout, including images of the electric chair, video images of the performance itself shot from vantage points above and around the stage, and photographs and video sequences by Paul Keogan and Amelia Stein. It is an intriguing spectacle, demonstrating a logistical depth and complexity which requires admiration.

The problem with the piece on the whole is that its concentration of aesthetic and polemical energies risks alienating its audience altogether. It is not clear why everything on stage is happening, and whether or not the details are relevant in making the overall point one presumes it is trying to make. There is a sense of moral outrage in the work, which purports to have been inspired by Andy Warhol&#146;s lithographs of Old Sparky (Sing Sing&#146;s electric chair). Yet the overall impression is of a visual and aural tour de force which has only incidental connection with the realpolitik. The audience is not necessarily cued enough as to the aesthetic codes and techniques being used. Arguably the play leaves too much of what it would like to say to the elliptical intellectual space for its own good. The theatrical flourishes draw so much attention to themselves that it is easy to get lost in them. It is possible to spend more time wondering why a set number of circuits of the stage are being made between expositional beats than thinking about the issues at hand. In this respect the production echoes the strengths and weaknesses of Blue Raincoat&#146;s Macbeth, although they are very different works.

It is good to see a piece of this nature performed at the National Theatre. Operating Theatre&#146;s previous work, Angel/Babel ran at The Project in 1999. Its success has led to the company being made this year&#146;s &#145;Peacock Partners&#146;, where an independent company is entrusted with the resources of the National Theatre in developing their production. Work of this type is not seen very often in mainstream Dublin venues and as such deserves a better audience than the one joined by this reviewer (21 people). It is a spellbinding show, although its aesthetic and intellectual remove makes it less emotionally affecting than might be expected.