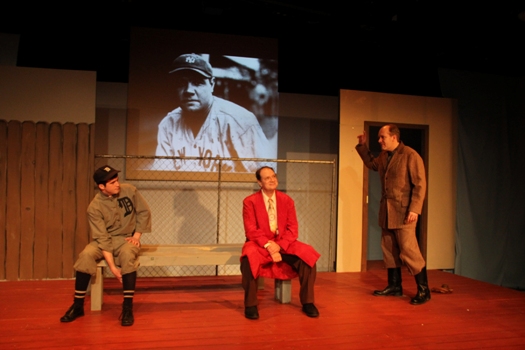 And certainly at the top of the “Do Not Nominate”list would be Tyrus Raymond Cobb, better known as Ty Cobb. For those unfamiliar with baseball history, Cobb is widely regarded as one of the best players — if not the best — ever to swing a bat. Over the span of a 24-year-long career he set some 90 records, some of which still stand, including a .367 lifetime batting average.

He was also a certain type of Southern white male in the early 20th century — a racist, a hater, a brawler (on and off the diamond) with a monomaniacal will to win. And win he did, often by intimidating his opponents (on and off the field). He was detested by the players on other teams and even by some of his Detroit Tiger teammates; they refused to room with him on road trips and, on several occasions, sawed his handmade bats in half.

In “Cobb,” Blessing conjures up three Cobb ghosts to reveal the man at different times in his life: there’s Peach (Daniel Sykes) as a young hot-headed hot shot rookie; Ty (Bert Emmett) as a 40-ish adult, no longer an active player, enraged by what he regards as inadequate recognition of his accomplishments; and Mr. Cobb (Kent Butler) as an elderly, lonely and largely forgotten man contemplating his final out.

Under the direction of Gregg T. Daniel, they fight with each other as fiercely as the real Cobb did with almost everyone during his 74 years of life — over an early family tragedy involving his parents; the tactics and mind games he used during his career to defeat opponents; his troubled and disappointing marriages; and his place in baseball history. The last-mentioned is a particular irritant to the middle-aged Cobb because of the then-public’s fascination with, and adoration of, Babe Ruth.

The three Cobbs are joined, intermittently, by the ghost of Oscar Charleston (Jason Delane), by all accounts an extraordinary African-American athlete who was frequently dubbed the “black Cobb” but never got the chance to showcase his talents because of the sport’s rigid segregation during the first half of the last century.

He appears as a caregiver to Mr. Cobb, a rival to Ty and a presence — a despised presence — to Peach. But there is no indication the real Charleston and the real Cobb ever met, let alone played against one another; instead, he seems to serve as a symbol of thwarted ambition and talent as well as a goad to the three Cobb ghosts and their internal demons.