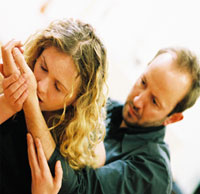 Dublin born poet and author Aidan Mathews studied at Stanford University under the philosopher and theologian Rene Girard. Communion is one of those plays which seems like the playwright is still working things out. Mathews has written something of a treatise on death, faith, and, as the dictionary definition of the word would have it, "a sharing of thoughts". Inflected through the theological sensibilities of an author immersed in Irish culture, the play is also understandably concerned with &#145;communion&#146; in its religious context. There are both textual and metaphorical references to the participation in the ceremony of the Eucharist and the bonding with Christ that it is supposed to be. The metaphor is extended even further in Mathews&#146; focus on a miniature community in which the sharing of thoughts and the fellowship of man takes place.

The community at the center of this story is an extended family. Widowed mother Martha McHenry (Stella McCusker) faces the twin trials of her troubled sons. Gentle, religious Jordan (Peter Hanly) lies dying from a brain tumor. His sick room is the set upon which all of the action takes place. His brother Marcus (Frank McCusker) is a manic depressive philosophy student whose recent two-year stint at a psychiatric institution has alienated him, in the eyes of his mother at least, from his own life (insofar as that life is defined by social class and his relationship with Martha). Marcus&#146; association with religion is more problematic than his brother&#146;s. While Jordan seeks for a sense of God which will help him to deal with his pending demise, Marcus&#146; messianic fantasies are part of his malady, leaving him conflicted between atheism and religious belief.

The characters who complete the extended family at the center of this work of dramatic discourse are a schematically varied lot. Mathews&#146; has been careful in his selection of individuals whose belief systems and life experiences will give range and weight to the discussion. Arthur McLoughlin (Bosco Hogan) is a polite, middle-aged, nautically-obsessed Methodist neighbor with a penchant for climbing into the sick room via the fire escape (after rather endearingly asking for permission to "come aboard" first). A kind of quasi-father figure to the family, his affection for both Jordan and Marcus is evident, though his effectiveness as a role model is limited. Another paternal stand-in is Fr. Anthony O&#146;Driscoll (Peter Gowen), a Catholic priest recently returned from missions in Africa with a surprisingly contemporary view of his Church. Rather than offering strictly dogmatic teaching, Fr. Anthony leads towards revisionist humanism; adding complication to Jordan&#146;s search for truth and meaning. The final piece in the puzzle is feminine (in fact, the character is spoken of as being "a most womanly woman" before she appears). Felicity Spellman (Janet Moran) is a Church of Ireland Protestant ("not Jewish", she assures Fr. Anthony on her arrival), a voluptuous, sensual woman who is dating Marcus and struggling with his complex needs.

As a brief glance at the characters makes clear, this is a play in which very little happens that does not emerge from a densely loaded fusion of psychological, philosophical, and theological themes. There is no plot to speak of. The play represents a moment of hesitation in which the various individuals concerned speculate upon what will happen when it has passed. Jordan&#146;s death is the pivot of the play, and only the epilogue, which takes place after he has passed on, presents anything in the way of narrative momentum. As such, Communion is not an immediate crowd-pleaser.

The play consists of a variety of dialogue exchanges between different combinations of characters, all of which revolve around a specific set of predetermined themes. Like chapters in a treatise, each scene is part of a greater whole, although its conclusions are far from original. Not all of the individual scenes are effective. Though some moments of connection or discussion between characters are rewarding and emotionally intense, others feel forced and contrived. The final meshing together of all of the elements of theme and characterization is equally uncertain in effect. Religious metaphors and Freudian catharsis included, Communion is an unrevealing exploration of responses to issues of faith and family in relatively contemporary Ireland (the play is set in the 1990s).

The Peacock production does benefit from Hanly&#146;s subtle and delicate treatment of the dying man and his relationships. Frank McCusker is also effective as Marcus, although the character does get great mileage from "can he really say that?" dialogue explained and justified by his mental instability. Rupert Murray&#146;s lighting and designer Francis O&#146;Connor&#146;s set are of particular note in establishing the tone of the production. The lighting casts the set in a cold palette of gray-blue which contributes to Hanly&#146;s pallor. Occasional bursts of warm orange add contrast, and highlight the emotional significance of particular moments and objects within the set. The set itself defies naturalist convention with its spare, quasi-surreal design. A spray-painted tree embedded in the rear wall proves a useful reflector for Murray&#146;s lights while the unusual entrance provided by the open window through which Hogan and Moran make appearances adds life to the stagecraft.