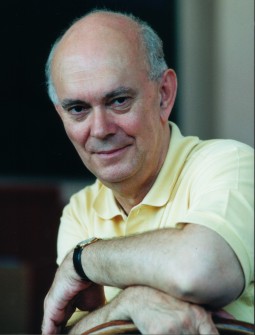 If summer is a time for light amusement (and that seems to be the theory under which Hollywood studios and book review sections of newspapers operate), then by all means have a couple of Margueritas and go enjoy Communicating Doors. It is light and clever, the pace is brisk, and the set and costuming perfectly evoke the appropriate feeling of generic British dowdy good taste and class stratification. The Margueritas beforehand will help with the suspension of disbelief which might otherwise be problematic.

Alan Ayckbourn (that is Sir Alan for his productivity) has written sixty-one of these generally entertaining theatrical pieces in his life-long association with the Scarborough Theater (now the Stephen Joseph Theater). Scarborough is primarily a holiday town on the coast in the North of England. The fare he provides there is appropriate for vacationing audiences who are looking for well turned phrases and snappy wit with just a soup�on of social commentary. To search for great meaning here is to miss the point of the play.

Communicating Doors takes place over a period of thirty years. Scenes bounce between 1982, 2002, and 2022. Though this is not science fiction, the fluidity of time is just one difficulty getting in the way of the suspension of disbelief. The set is a hotel room in London and the opening scene takes place in 2022. By going through a closet door certain characters move back and forth in time–is this C.S. Lewis’ The Lion,The Witch and The Wardrobe for adults? The audience, alerted by dramatic musical chords, is to understand that the set is in fact two adjoining identical hotel rooms differentiated only by decades.

Poopay (Amy Chaffee) is a leather-clothed dominatrix who has been summoned by Julian (Michael Carr), confidant and business partner of dying, wealthy, twice widowed Reece Wells (Alan Brooks). Wells has requested the scantily attired whore to witness a handwritten document confessing a string of illegal activities to which he has been party over his lifetime, including complicity in the murder of his two wives by Julian.Poopay is a sexy, sturdy little tart with a tongue that matches her specialty. When Julian leaves, she expresses her doubt that the old man is up to what she has to offer professionally and Reese reveals his real interest in her. Poopay may be low class and uneducated, but she is no fool and she refuses.They have a minor physical skirmish and he falls over apparently dead. In a panic she summons Julian who has left his extension number on a pad wanting her to summons him as soon as the &#147;business&#148; between her and Reese is finished. Only when Julian returns does she realize that he was the actual murderer (having also dispatched his mother before); he calls Poopay &#147;mother&#148; and she figures out she is to be the next victim.

The scene is thus set for trip number one through the closet door, plunging Poopay into the room of Ruella (Lisa Pelikan), the deceased Mrs. Wells number two, on October 4, 2002, the night before Ruella&#146;s murder.Ruella is a brisk, proper, moral, can-do sort of woman about whom her husband, in 2022, has told Poopay &#147;There&#146;s no place in business these days for an honest wife.&#148; Ruella (2002) is on the verge of divorcing Reese for his shenanigans. After a lot of nonsense, including Ruella&#146;s going through the same door and ending up in the hotel room in 1982 on her husband&#146;s wedding night with Jessica (Rachael Lyerla), Mrs. Wells number one, Ruella and Poopay deduce the time warp and set about to change history and save the lives of the three women.

In the honored tradition of time travelers, Ruella and Poopay are the same age in whatever era they appear.Brooks convincingly portrays Reese across the range from moribund old man to dashing young buck (in that order). Lyerla is properly ditzy as Jessica, the young socialite and later as the matron Jessica never became. Michael Carr (Harold, the hotel security officer) is less successful conveying the range of ages required.

Communicating Doors is like watching Nancy Drew, girl detective, pondering the adolescent philosophy question: How much would history have been different if another butterfly had flown over the path in front of Julius Caesar, as written by Noel Coward when he was close to but not at the top of his form.The Margueritas of the first paragraph help to get past the soul-searching philosophical question as well as the time warp issue.The characters get themselves through on Glenlivet and brandy. Why should the theatergoerapproach this with any less dulling of the senses?

September still qualifies as summer in Los Angeles and Communicating Doors is brighter than much of what Hollywood offers for the season.On the other hand, there’s not much here that will stimulate serious thought a week after seeing it. Not everything can be momentous.