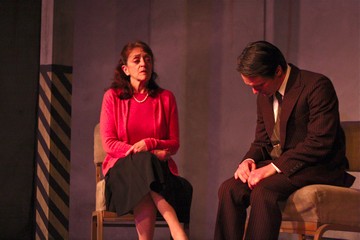 “Why did he come?” Margrethe Bohr repeatedly asks her husband, the great Danish physicist Niels Bohr, the acid in her voice etching the why? ever deeper in our consciousness, “why did he come?” “He” is Werner Heisenberg, destined also to become one of the 20th century’s great theoretical physicists, who has come, alone, to the Bohr’s home in Copenhagen. But “why” has he come?

Ahhh—that’s the crux of both this play and a true event that, to this day, 70 years later, remains a mystery.

The time is September, 1941, and the world is aflame. The Japanese are overrunning much of Southeast Asia. Hitler has taken possession of all of Western Europe and is savaging the Soviet Union. Although not yet caught up in these conflicts, the United States has begun work on an atomic bomb, with considerable help from a cadre of German-Jewish physicists who have fled Nazi Germany. And in Germany, a small team of physicists, under Heisenberg’s direction, is carrying out research on a nuclear reactor—not quite the same thing as a bomb, but which is, nevertheless, central to the development of such a weapon.

Heisenberg studied atomic physics under Bohr at the University of Copenhagen in the 1920s; there he developed his theory of “uncertainty,” an achievement that won him a Nobel Prize in 1932. A strong bond was forged between the two men, 16 years apart in age, a friendship that continued up until that visit to Copenhagen in September, 1941.

(Here’s an admittedly oversimplified example of the theory: a thermometer placed in a cup of hot coffee transfers an infinitesimal amount of energy from liquid to instrument. The temperature of the coffee is now different from what it was before the thermometer was inserted, which prevents us from knowing precisely the true heat of the coffee. Thus the act of observing has an effect on the thing observed.)

Is uncertainty an integral part of nature, to be found in everything from subatomic particles to the temperature of hot coffee to personal relationships? For playwright Michael Frayn, it is—and uncertainty is the touchstone of this marvelous play.

“Copenhagen” opens with the three actors—Joanna Churgin as Margrethe Bohr, Jack Winnick as Niels Bohr and Richard Lucas as Werner Heisenberg—facing the audience. (The Attic Theatre and Film Center is a small, 40-seat venue in a downscale neighborhood of Los Angeles.) One by one, a spotlight falls on their faces as they tell us this play is an imaginary, after-life encounter of the three of them, still trying to ascertain what really happened so many years ago.

“My dear Heisenberg!” Bohr booms as he turns to greet Heisenberg; he is obviously delighted to see his protégé again. Margrethe is cordial but, because of all the turmoil in Europe and Asia, is cautious bordering on suspicious: “Why did he come?” For his part, Heisenberg is happy to be in their company. His admiration and affection for Bohr is obvious; he teases the older scientist about the nickname given him by younger scientists, “The Pope of Physics.”

But it’s equally clear he’s nervous and is anxious to discuss with Bohr something of grave importance; he did not travel from Berlin to Copenhagen, in wartime, just to reminisce about the old days.

After some chit-chat that only serves to heighten the tension surrounding the visit, the two men agree to go for a long walk—something they had often done, with great pleasure, just a few years earlier—and discuss scientific matters. They circle the small stage, seemingly in deep conversation, as Margrethe—both a commentator and interlocutor—tells the audience about the way things used to be between them as well as her misgivings about Nazi Germany.

The two men return abruptly, Bohr clearly agitated, Heisenberg defensive. Something serious has happened during that abbreviated walk, something that has estranged both men—and Heisenberg, by virtue of his coming to Copenhagen, is assumed to be the provocateur.

It has also been widely assumed by physicists and science historians that the nuclear intentions of America, England, and Germany were almost certainly the topic of their brief conversation and thus at the core of their rupture. Despite the recollections Bohr and Heisenberg later left behind, this issue remains unclear.

Several possible explanations, with subordinate variations, for Margrethe’s “why?” are offered:

Heisenberg seems intent on the last theme, insisting that the completion of a uranium reactor would be a triumph for German science. If successful, he feels he can keep it out of the hands of the German military. In this regard, he resembles Colonel Nicholson in “The Bridge on the River Kwai,” doing the right thing for the wrong reason.

In their fictitious after-life meeting, near the end of the play, Heisenberg confronts Bohr with this blunt question—wouldn’t Germany have been the first target of the American A-bomb if the war in Europe hadn’t ended when it did? Yes, Bohr concedes, but then quickly tries to justify the bombings of Hiroshima and Nagasaki by saying “at least we were not supplying the bomb to a Hitler.”

Heisenberg skewers Bohr. “You weren’t dropping it just on Hitler. You were dropping it on anyone within its reach…old men and women on the street, on mothers and their children…my countrymen, my wife, our children…me.”

Bohr, abashed, answers: “That was the intention.”

Whatever uncertainties surround Heisenberg’s purpose in going to Copenhagen in 1941, the loud boom and bright flash of white light on the back wall of the sparse stage—simulating an atomic bomb explosion—at the end of the play leaves no uncertainty about the horrors of nuclear weapons.

Jack Winnick is a very credible Bohr, at times overflowing with bonhomie for his one-time student and friend and at others astonished and angered by Heisenberg’s obliviousness to the Nazi threat. Joanna Churgin is a stalwart Margrethe, with a good understanding of the physics that is her husband’s life and very much attuned to the dangerous world in which they find themselves in 1941. Richard Lucas was uneven in his portrayal of Heisenberg, at times convincingly revealing the latter’s conflicted purposes and emotions, at others reciting his lines in a flat, unconvincing manner.