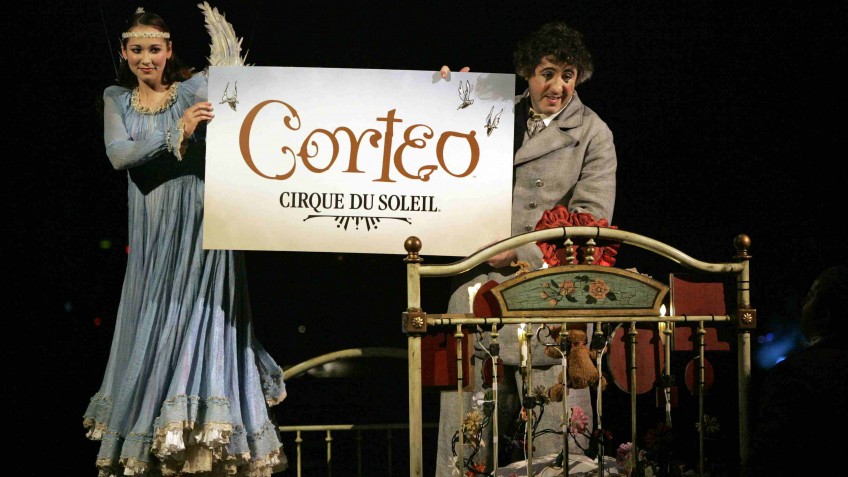 If our major airlines performed with the same precision and pizzazz as Cirque de Soleil, they might be making a lot more money and we would all be having a lot more fun. As it is, the only flying being done down in the SBC Park parking lot in San Francisco is by aerialists and a bevy of winged "angels" but that&#146;s just fine. Cirque&#146;s newest offering, Corteo, is a lovely ride with very little turbulence along the way. And, if you&#146;re willing to pay for it, there&#146;s even popcorn.

The Montreal-based Cirque de Soleil organization has gone from 73 employees to more than 3,000 since it first put up its tent in 1984 and, with 11 different shows — some touring worldwide and some in permanent residence (four in Las Vegas alone) — one might say it&#146;s doing rather well. From the sellout, enthusiastic, hand-clapping, foot-stomping crowd at Corteo&#146;s opening night, you might say it is doing very well indeed.

At first glance, however, the viewer may think this is a touring company of Phantom of the Opera. A prettily-painted transparent drop curtain shows a bucolic old-fashioned scene of ladies and gentlemen and cupids; enormous chandeliers seem to be all over the place. Solemn organ music plays. No, wait, maybe we&#146;ve stumbled into Angels in America because here’s a flock of winged angels overhead. No, it&#146;s only a funeral after all.

The slight story line of Corteo regards a clown (the rather portly but endearing Mauro Mozzani), who dreams that he has died and is observing his own funeral. This becomes the frame for a myriad of bizarre visions and high-flying feats of daring, as well as some slapstick comedy and a parody of an old "Punch and Judy" show. Because this is Cirque de Soleil it all is accompanied by live music, stage smoke and striking lighting effects. And because this is Cirque de Soleil, lots of mysterious figures appear, never to be explained, and, in the end, when the clown rides by overhead on a bicycle, waving down to his friends, we are no wiser than before &#150; but vastly entertained.

The clown&#146;s dream-hallucinations manifest themselves as the circus acts. The giant chandeliers turn and sway as his former loves perform aerial acrobatics in and around the lights. In a little kid&#146;s fondest fantasy, a group of acrobats bounce all over a pair of beds. Jugglers juggle and a man climbs a free-standing ladder with graceful ease. There are tightrope walkers and trampolines, human "horses" and four amazing guys who raise the child&#146;s teeter totter into the realms of high &#150; very high &#150; art. A man dressed as a ringmaster (Sean Lomax) whistles up a storm; or rather a veritable symphony orchestra and two "little people," Valentyna Pahlevanyan and Taras Shevchenko, charm both each other and the watching audience.

Costumes by Dominique Lemiex are, as always, gorgeous. The set is built around a labyrinth on the floor that mimics those in the Cathedral of Chartres and San Francisco&#146;s own Grace Cathedral. Aside from moving people and props around now and then and looking nice, however, this element seems to have little purpose. Director-creator Daniele Finzi Pasca seems to have crammed most of his best stuff into the first act. After a half-hour intermission (allowing time to purchase that popcorn and a whole lot of other Cirque merchandise) the second act is a little anti-climactic. But, taken all together, Corteo is, as they say, more fun than a three ring circus.