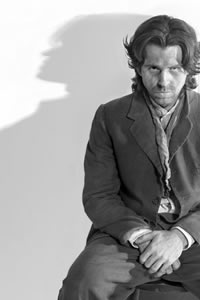 Why did he do it? Well, why not? If the extraordinary man has the right to decide good and evil for himself, all great men are, in a sense, criminals.

The foregoing is, if not an exact quote, a paraphrase from Dostoevsky’s great novel “Crime and Punishment,” a study of guilt and innocence, right and wrong, torment and redemption that has fascinated readers and scholars for almost 150 years. To condense this massive tome and all of its varied ideas into a 90 minute play would seem to be an impossible task. But Marilyn Campbell and Curt Columbus of the Writer’s Theater of Glencoe, Illinois, have done it – and very well. Berkeley Rep has brought it West and, largely due to a virtuoso performance by Tyler Pierce as the young philosopher/murderer Raskolnikov, it is, if not exactly a triumph, an interesting bit of theater.

In case you missed it in high school or college, this is a tale of an impoverished student (is there any other kind?) who takes an axe to a miserly old pawnbroker and then to her innocent bystander of a sister, is arrested, sent to Siberia and ultimately rehabilitated through religion and the love of a good woman. This abridged version omits the Siberian section, leaving the possibility of redemption open to conjecture.

Christopher Barrecca’s claustrophobic scenic design, a multi-tiered backdrop of weathered blue doors through which actors appear and disappear almost is a character in itself. Onstage are a shabby cot, a desk and chair representing the police inspector’s office and little else. In addition to Pierce, the cast includes New York actor J.R. Horne as Inspector Porfiry, a kindly but determined veteran cop who gently breaks his suspect down to a confession, and Bay Area favorite Delia MacDougall as Sonia, the God-fearing prostitute who loves Raskolnikov and hopes to bring him to terms with what he has done. Horne and MacDougall also double as several other key characters: the murdered women and Raskolnikov’s mother for her and Sonia’s father and a tradesman for him. They are very good but all eyes are on Pierce, ragged, nervous, defiant, tortured and a great example of how an actor can disappear into a part.

The Campbell-Columbus adaptation has cut all the fat but kept the key ideas of the book. Does God exist? Can a dead soul be resurrected? Is there a moral distinction between the acts of ordinary and extraordinary people? Is murder ever justified? One picture is worth a thousand or more words and the sight of Raskolnikov writhing as his conscience strangles him as surely as he bludgeoned the old woman and her sister tells the tale.

Focus is on the duel of words between the police inspector and his suspect. Porfiry actually seems to like Raskolnikov. Something of an intellectual himself, he is interested in his ideas. But, like the Royal Canadian Mounties, Inspector Porfiry always gets his man. And, when he gets Raskolnikov, it is more a case of fatherly love than justice triumphant. Because the student really is kind of a good guy – murderous tendencies aside. He loves his mother and his sister and, although chronically strapped for cash, he gives away his last ruble so that Sonia’s drunken father can have a proper funeral. Porfiry sees that Raskolnikov is punishing himself more than the state could punish him. Siberia, in this case, is almost the icing on the cake. With emphasis on the ice.

(13402)
$48.99 (as of January 26, 2021 - More infoProduct prices and availability are accurate as of the date/time indicated and are subject to change. Any price and availability information displayed on [relevant Amazon Site(s), as applicable] at the time of purchase will apply to the purchase of this product.)

(27678)
$9.99 (as of January 26, 2021 - More infoProduct prices and availability are accurate as of the date/time indicated and are subject to change. Any price and availability information displayed on [relevant Amazon Site(s), as applicable] at the time of purchase will apply to the purchase of this product.)

$5.19 (as of January 26, 2021 - More infoProduct prices and availability are accurate as of the date/time indicated and are subject to change. Any price and availability information displayed on [relevant Amazon Site(s), as applicable] at the time of purchase will apply to the purchase of this product.)
related posts