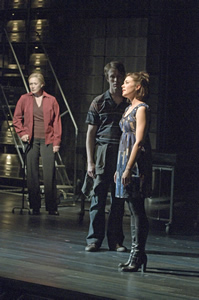 Written and Directed by Moisés Kaufman

In 1819, a wealthy music publisher by the name of Anton Diabelli created a 45-second mediocre waltz and challenged the best-known composers of the time to write variations on the tune. All accepted. All except Ludwig Van Beethoven who thought it was garbage. However, Beethoven soon changed his mind and composed not one, not two, but 33 variations on the little waltz. It is his longest piano composition and regarded by musicologists as one of the greatest masterpieces of the variation form. No one knows why he changed his mind and what pushed him to dedicate a few years of his life to an otherwise unnoticeable piece of music.

This story is the one Moisés Kaufman heard from a music store salesperson one evening four years ago. The acclaimed theatre writer/director wanted to buy a Beethoven piece to add to his classical collection. He came out of the store with a recording of the Diabelli Variations and after listening to it, he just knew he had to write a play about it. And so started his obsessive journey to uncover the “primary cause of things.”

Moisés Kaufman (The Laramie Project and Gross Indecency: The Three Trials of Oscar Wilde) created a fictional character, musicologist Katherine Brandt, who is determined to find out why Beethoven spent so much time on composing the variations. She needs to go to Bonn, Germany, where the composer’s music sketches are archived. However, her health is compromised and her daughter Clara tries to prevent her from going. As the mother’s obsession with the musician grows, Beethoven’s life and work unfold.

The play takes us everywhere in space and time, from today’s Bonn to Vienna in the 1820s, from a concert hall to a library basement. It exposes us to delightful and comic first love, to the integrity of friendship, to the most intimate moments of creation and to the deepest feelings of despair. And before the audience has time to wonder how it all connects, it comes together beautifully. We discover the play is not so much a biographical study as it is a life revelation. I could write another five pages to describe to you how many magical, hilarious, mystical, beautiful, sad, hopeful and powerful moments this show contains… But instead, I will simply say that it is one of the best plays I have ever seen!

The actors in the production are all first class. Zach Grenier skillfully portrays a passionate Beethoven. On stage, he works with pianist Diane Walsh who plays about two-thirds of the stunning Diabelli Variations during the course of the play. Together they magically reveal to us the secret ardor of the creation of music. Erik Steele is Anton Schindler, Beethoven’s assistant, and Don Amendolia is Anton Diabelli. Jayne Atkinson as Katherine Brandt is amazing, both in her physical and emotional interpretation of the character. She is joined by Laura Odeh as Clara Brandt and Ryan King as Mike, the ever-clumsy male nurse. Susan Kellermann plays a German librarian who becomes a very important part of Katherine’s life and work. The combination of her stoic portrayal and her comedic timing is priceless.

The set (Derek McLane) is deceptively simple. It is composed of a proscenium made of file boxes and 4 movable panels of sheet music on which lights (David Lander) and projections (Jeffrey Sugg) dance magnificently throughout the play. This combination, along with very powerful sound effects (Andre Pluess) proves incredibly versatile and the audience travels easily and magically in space and time. We can see Beethoven’s music sketches being written on the back wall or a carriage ride through the streets of Vienna and we experience a trip in an elevator and the intimacy of a hospital examination room. These are just a few of the many magical moments that the show is composed of.

The production opened last year at Washington D.C.’s Arena Stage and is on its first West Coast run. It recently won the American Theatre Critics Association’s 2008 New Play Award and deserves, in my opinion, to be awarded a lot more prizes in the future.