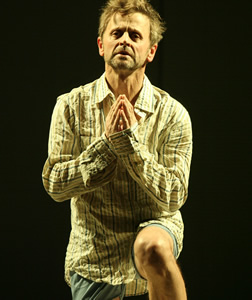 Mikhail Baryshnikov has been making plenty of varied appearances in New York over the past year, so much so that it’s easy to take this ballet icon for granted. If that’s his intention, he’s even smarter than we might think. Last summer, he performed with Hell’s Kitchen Dance at his own Baryshnikov Arts Center, in choreography by Donna Uchizono and Aszure Barton. In that, he did his best to fit in with the half-or-a-third-his-age ensemble, but was seemingly so delighted with the concept that he neglected his modern dance poker face, cracking a faint smile. By now, between his Hell’s Kitchen appearances, his frequent attendance at performances in the city, even reruns of White Nights and Sex in the City, seeing him in person is no big deal, which makes him all the more believable in character.

Baryshnikov recently performed in Beckett Shorts at New York Theater Workshop, directed by Joanne Akalaitis. When he bursts onstage in Act Without Words I, it’s easy to forget his past and be swept along as one absurdity follows another. He’s wearing a smart blue suit and t-shirt, but gauging by Alexander Brodsky’s elegant, minimal set featuring three walls of venetian blinds grounded by a floor of sand, he’s on a deserted island. Props descend, dangling from thin wires like ephemeral hopes – a palm tree, colorful cubes/steps, scissors, rope, and a pitcher of water — the ultimate temptation. The other props appear merely as means to get the water, and when that fails, aids to commit suicide, at which he fails as well. The quixotic balance of life’s distant promise and futility resonates uncomfortably clearly. Philip Glass contributed wonderful incidental music that plays beforehand and between pieces.

Act Without Words II begins with a pair of rumpled green sacks lying on a shallow platform that looks like a shifting tectonic plate. After a jab from a comical metal poker that epitomizes the way artist Brodsky charges inanimate objects with character, Baryshnikov emerges from one heap. Intoxicated, wearing a wrinkled shirt and shorts, he fumbles to gulp some pills, and dons garments lying in a neat pile near the other heap, which he then drags a scant foot. Reverse action other than dragging. Next heap (David Neumann) emerges; his tics are wristwatch-checking, teeth brushing, hair combing, and folding aforementioned clothes neatly. When he drags the other sack a foot, it finally sinks in that this is their – our — entire life, which is now about mid-stage, middle aged. That much pointlessness behind, more ahead.

Bill Camp and Baryshnikov speak in Rough for Theatre I, the wheelchair-bound Camp in an authoritative, husky gruff. Baryshnikov plays a blind violin player. Each is dependent on the other for, respectively, mobility and vision. They spar and torment one another, together making up one self-loathing, wretched being. In Eh Joe, with a hypnotizing contralto, Karen Kandel verbally skewers her ex, Joe (Baryshnikov), who sits despondently on a bed across the stage, mute to respond. His face is projected hugely on the front scrim and smaller elsewhere, so that his entire performance is simply reacting with tiny facial adjustments to each scathing barb. Finally, Kandel gets out of her chair and slithers across the sand, transforming into a hissing serpent. Joe’s face grows ever larger, as does the pain we read on it. For a short while, Baryshnikov’s adept expression makes us forget his great dancing ability. We are lucky witnesses to this one-of-a-kind talent exploring his many options.