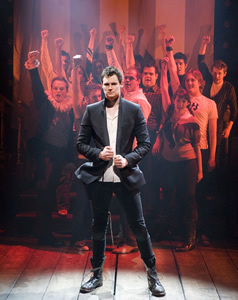 Andrew Jackson, seventh president of the United States (1829 – 1837) as the subject of a mostly humorous rock musical? [Actually as it is billed as an “emo rock” musical and I have never heard that category, I shall ignore the technicality.] It sounds like pushing credulity but with a little – maybe a lot – of poetic license Bloody Bloody Andrew Jackson at the Kirk Douglas is entertaining and tongue in cheek timely.

An American history refresher: Jackson, known as “Old Hickory,” was a pure frontier character. Orphaned at the age of 14, he led a life of poorly supervised adolescent bravado. It is believed that he fought in at least 100 duels. While in the White House he gave raucous parties for mobs of people. One time the mob became so rowdy the liquor was thrown out the windows to lure the partiers out. It worked. His persona definitely is consonant with quintessential rock star, and Benjamin Walker’s long, lean and limber body, and his embrace of the microphone and apparently boundless energy captured the essence of the frontiersman president as well as rock star.

Earthy and of poor beginnings Jackson rallied working class Americans to support him giving birth to the Democratic Party, celebrated here by a rousing chorus of “Populism, Yeah Yeah,” Don’t ask how, but it works. With his swashbuckling folk ways Jackson scorned and bypassed what has become to be known as ‘inside the beltway’ thinking reaching out to the people he represented. That made things pretty good for you if you were a frontiersman, not so good if you were one of the Eastern Indians who was either killed or had his land stolen and was pushed across the Mississippi River.

What Alex Timbers brings to the stage is not so much a history lesson as a riff on history. The major points are accurate but poetic license is taken here and there. Though the stories have little in common, except for extended adolescence, Bloody Bloody Andrew Jackson brings to mind Avenue Q. They each bristle with energy that seemingly emanates from the actors and musicians own cores and wit that is college humor at its very best from very sophisticated college sophomores.

What does not make sense is the theme of “cutting” that runs throughout. I do not believe there is any evidence that Jackson engaged in self mutilation – his dueling scars were enough—and if it was an attempt to make him a more modern adolescent the behavior is badly understood. Nothing would be lost dramatically were “cutting” to disappear. The last twenty minutes do lag a bit, but that seems by no means unusual in modern theater.

The parallels between then and now are not coincidental. Timbers wanted his work to be released before the 2008 election. The act-without-consultation, make-your-own-rules frontiersman president brings echoes of the current administration. The parallel between Jackson’s winning the popular vote, but not the presidency in his first run for the office, brings to mind the election of 2000.

All of the allusions are serious stuff but do not detract from the pure entertainment offered up by the versatile cast. You could even love the current administration and still find Bloody Bloody a delightful diversion. Though by no means a children’s theater, it is an obvious choice for a youngster with any interest in theater or music. Maybe such a teenager could even explain to you what “emo rock” means and does knowing that lead to even greater enjoyment of the evening? I doubt it.