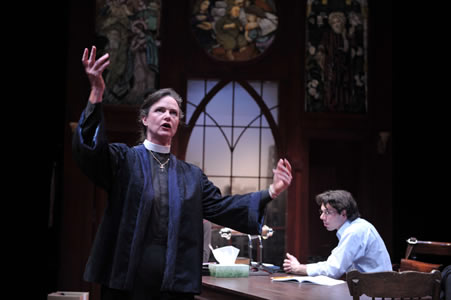 At first glance – and if you read the publicity material – “The Busy World is Hushed” would appear to be about religion, specifically the Episcopalian interpretation of the Gospels. But at second glance you see that is a plot frame upon which a whole lot of other stuff is hung. Keith Bunin’s three-person drama, having its West Coast premiere after a successful off-Broadway run, really is about the nature of love and commitment – or the lack thereof. This takes in the love for fathers, both dead and dying; the love between mother and son and the love of lovers, in this case two young men. And, of course, the love of God for what God has created and the obligation to love God in return. The commitment issues similarly involve commitment to parents, commitment to lovers and, in the case of Hannah, an Episcopalian minister, widowed young and trying desperately to hold onto her difficult, rebellious son, commitment to her God.

Superbly performed by an excellent cast at Aurora Theatre in Berkeley, Bunin’s play is thought provoking, raising far more questions than it answers. It is like a meal that is not particularly satisfying but nevertheless sticks to you long after you have left the table. Hannah (Anne Darragh) has discovered a new manuscript that may be a Gospel predating those of Matthew, Mark, Luke or John. An academic, as well as a cleric, she is writing a book about it. Except she can’t write. She’s a good talker — her sermons and lectures are more or less extemporaneous – but she can’t write. To this end she hires an assistant, a young writer who is temporarily blocked on his own work and needs a distraction from troubles at home. Brandt (Chad Deverman) is dealing with his beloved father’s diagnosis of a brain tumor. He also is gay. As luck would have it, so is Hannah’s son Thomas (James Wagner), something of a polymath drifter who has come home to learn more about his own father who died before he was born.

The circumstances of that death, some 27 years in the past, are mysterious. Did Thomas pere walk out into the Maine surf to end it all or was he swept out to sea? Also a minister, was he disillusioned with God or terrified of impending fatherhood? He did seem to be depressed but did he have the same self-destructive tendencies and fear of commitment that have been driving his son? And, as his mother fears, will Thomas end up the same way? Far from taking the homophobic stance of many of her colleagues, Hannah pushes the two young men together, hoping that her new assistant will provide some stability and an incentive to keep her son at home. Of course these parental fixups rarely work out …

Bunin bats these ideas back and forth during the scant two hours of running time. The dialogues between the two men are glib and clever, perhaps a little too much so. Exchanges between the minister and her assistant are ecclesiastically esoteric; between the minister and her son, well, like the conversation of a nagging mother and smart-ass kid. It’s not a perfect play but it is perfectly performed by the trio of actors and well directed by Robin Stanton. The Aurora stage has been transformed into a cluttered high-rise diocesan apartment, complete with stained glass windows. “The Busy World is Hushed” is the kind of play that you’re not sure you’re going to like going in. But hush your doubts and you may find that it has something to say to you.