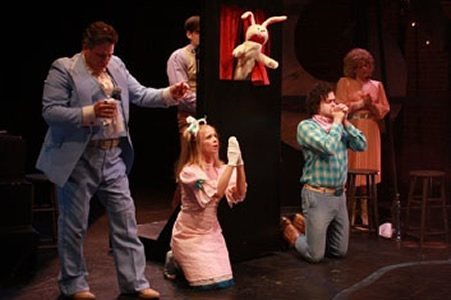 By: Adam Simon and Tim Robbins

Twenty years ago Adam Simon and Tim Robbins wrote Carnage, a raucous send up of televangelism and adults in camouflage playing war games with deadly seriousness. It is now 2008 and televangelism appears here to stay. Iraq has become the playing field and it is not just enlisted men; there are private “security services,” such as Blackwater, and they are using real weapons instead of paintball ammunition. Not only that, we now know that the founder and mastermind of Blackwater has close ties to both the Republican Party and the evangelical Christian movement. All this is by way of saying, there is nothing dated about the subjects enthusiastically dealt with in Carnage.

That is the good news. If you come to the theatre with a healthy disdain for right wing commercialized Christianity and think that adults dressing up in uniform and playing pretend paintball commandos are nuts, perhaps this good hearted send up will please. However, if you demand more of a story arc you may have some problems with Carnage. Carnage lacks the tight writing and complex structure of Tim Robbins’ more recent Embedded, though stylistically the two are related. If you caught Bloody Bloody Andrew Jackson, which is playing at the Douglas down the street, by contrast you will probably be disappointed at the relatively uninteresting use of music and the often wearying bounciness of this production.

Cotton Slocum, played by V.J. Foster, is an overweight, smarmy, blue polyester suited, and greasy pompadour crowned pastor of God’s Happy Church. His preaches “charismatic optimism” – do I hear a hint of “compassionate conservatism?” – to his flock as he pumps them for money. His wife of the over made up adoring eyes, Tipper, played by Donna Jo Thornblade, looks and acts a lot like Tammy Baker. They are available on television at all hours of the day and night a-saving souls and a-plugging the Heavenly Theme Park they have built. Slocum is not totally without insight. Act I opens with the older preacher trying to teach young Tack, Justin Zsebe, the moves in order to follow in his footsteps. That is literally, follow in his footsteps, as he gives Tack both the words and the choreography to rope the people in and keep them mesmerized. It is one of the genuinely funny moments as he is counting out the beats and scripted gestures like an Arthur Murray dance instructor.

Interspersed with the satirization of televangelism are a group of men bouncing around in all seriousness playing their paintball commando charade. Though the program contains articles making the connection between the two movements there is little on stage to make the link.

Where would an evangelical be without a little Armageddon? Act 2 and Slocum, undertakes a photo-op pilgrimage to collect money for a much desired trip to Las Vegas only to be accidentally shot from a cannon … don’t ask. When he regains consciousness he is disheveled; his pseudo pilgrim costume is in tatters. He is certain that the Rapture has happened and God has made a mistake neglecting to take him up too. That leads to a lot of futile jumping to give God a hand. Is it a coincidence that Slocum rhymes with hokum? Probably not. Subtlety has no place in Carnage. He encounters some survivalists who have been hunkered down underground; I suppose they were the next chapter of the paintball militia though that was not clear. But his preaching does him no good as a disheveled old kook in rags. Meanwhile Tack has taken up the ministry to replace the missing Slocum and his whole approach completely differs from the choreography Slocum was so sure would be the magic glue to keep his parishioners in the fold. Unless you count the strangling of a rabbit puppet who had spouted bromides to the faithful viewers not a lot happens and Tack preaches off into the Sunset.

As I said, the arc did not have a lot of structure. Timely as the issues still are, Carnage adds little to the discussion. Perhaps in the era of John Stewart and Stephen Colbert the bar has been raised a little higher for pointed political humor. Embedded reached the mark and then some. Carnage did not.