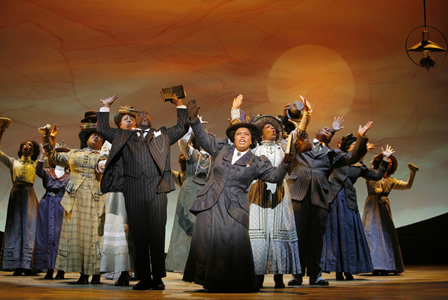 The Color Purple (the musical)

Based on the novel by Alice Walker

There is a clue to the musical version of The Color Purple, in the long list of credits above. It is indeed a product of a committee, all be it a well credentialed one, and this musical presentation of the story is the third iteration: novel to movie to Broadway. Much like a game of telephone or whispering down the lane, much of the grit and pain of Walker’s novel has been lost or blunted along the way. Published in 1982, The Color Purple, was the embodiment of angry feminism. It is a story that would perhaps be better suited to an opera than to a Broadway musical.

The crowd pleasing generic gospel music processed through a pop filter makes the first act quite entertaining, but more uplifting than consciousness raising. Gone is the howl that infused the novel.

Act two ultimately wrings tears, but in the effort to tie up all the loose ends and fill in the details of decades it flails around, rushing through years of bitterness — playing havoc with continuity, and missing quite a few important facts — to a too neat conclusion. Opening with a phony African tribal dance things do not improve as the act trudges on. For the mercifully small number of Angelinos who suffered through The Ten Commandments – the Musical, a few years ago, this pseudo tribal affaire with Hollywood style costumes will undoubtedly bring back bad memories. Neither music, choreography nor costumes offer a redeeming virtue though through no fault of the earnest performers. The committee should have voted to drop this scene in favor of better story development for the rest of the hurried tale. Forty years is a lot of time to cover; no point in wasting time on a pointless exercise.

For any one who has missed the story, a simplified consolidation of the plot is that of an abused 14 year old black girl, Celie, Jeanette Bayardelle, whose one loving relationship is with her younger sister Nettie, LaToya London, and her development over 40 years into an independent, strong woman.

Skinny and unattractive young Celie has been raped by the man she believes to be her father, who takes away the second child she has borne by him and who essentially sells Celie as a wife to an older man, Mister, Rufus Bonds, Jr.. Mister really wanted pretty little Nettie and he beats Celie virtually enslaving her to care for his children, his house, his farm and his sexual urges. He tries to rape visiting Nettie who flees, and he promises Celie she will never hear from her sister again. Mister is in love with Shug, Michelle Williams, a voluptuous and promiscuous singer, as is every other adult male around. The difference is that Mister has had an ongoing relationship with Shug.

Shug comes to town collapsing from an apparent venereal disease and Mister brings her home to Celie to nurse. In the process Celie falls in love with Shug too and finds strength and sexual fulfillment in the relationship.

Alice Walker’s novel is told mostly as a series of letters Celie writes to God and her sister – alive or dead, Celie does not know — plus diary entries covering 40 years. Written in the vernacular of a poorly educated black woman it is dense with character and plot complexity, bristling with anger directed generally toward black men and simmers with lesbian passion. Celie is isolated and has an intense, tormented, and personal relationship with God. The gospel singers of the play have a social relationship with religion of which Celie is not an active part. These exuberant church goers are good entertainment who belong to another story.

But sing and dance the ensemble does with rousing vigor, primarily under the guise of the church, of which Celie, despite her dialogue with God, is hardly a part. Though not essential to the plot, three church ladies (Kimberly Ann Harris, Virginia Ann Wood ruff and Lynette Dupree) are very entertaining as the gossiping neighbors whose religion seems more a matter of dressing up than belief. The committee must have thought the church ladies would be a lightening element in an otherwise bleak story; they were right, it is just not what one recalls from the novel.

Shug is the character who brings the novel to life. By rights she should ignite with her voluptuousness. Michel Williams is a beautiful woman with the body of a fashion model, not a sexual idol. Even her sexy moves lack an earthiness that would be true to the setting, and her singing is competent, not lush making it a stretch to envision her hold on all around her.

Though this is Celie’s story, she is often an observer, not a participant, in what is going on around her. When Jeannette Bayardelle, a talented gospel recording artist, lets loose Celie’s powerful wail of freedom under laden with pain at the end of the second act, it is one of the few moments where The Color Purple, the musical, ignites and reflects The color Purple, the novel.

One suspects that John Lee Beatty’s attractive set and Paul Tazewell’s costumes are a prettified depiction of the lives these people would have led in the Georgia of the first half of the twentieth century. Tazewell’s costumes for the African sequence are simply terrible. The galloping time line is not always realized in the staging. It translates to multiple scene and costume variations which denote change more than aging.

The committee has delivered an enjoyable first act. The energy of the gospel singing is magnetic, if not exactly what the story ordered. However, it is hard to imagine how the committee could have met and Okayed Act 2. Read the book for Walker’s voice. See act I for sheer entertainment.