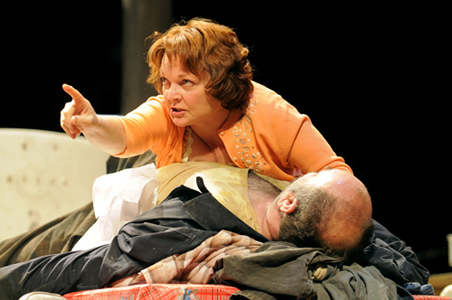 The Curse of the Starving Class

The curse of the starving class may very well be hope: hope that the next time you open the refrigerator it will be filled with food; hope that you can escape debt and a hard life by running away to Mexico or Europe; hope that, if you just hang in there long enough, things will change, hope that is fueled by politicians and the advertising industry.

Nobody writes dysfunctional families better than Sam Shepard and, if the family in “Curse” doesn’t define dysfunction, nobody does. On a hardscrabble ranch somewhere in California, the Tate clan: drunken dad, Weston (Jack Willis); dreamy deluded mom (Pamela Reed); Emma, the rebellious teenaged daughter (Nicole Lawrence) and the son (Jud Williford), who rapidly is losing his mind trying to hold it all together, followed the American Dream after WWII and then had a rude awakening. (A nice design touch is a small American flag stuck into a flowerpot in the littered yard). There was no pot of gold at the end of their rainbow, only poverty, debt and despair. And yet they keep buying and dream on. The story has a creepy resonance in the economy of today.

Both Mom and Dad have a secret plan to sell the old place – each without telling the other – and taking off with the money. The daughter just wants to get out – and in the end she does, but not in the way she had hoped. The son walks around nursing a sick lamb – who occasionally upstages the actors – tries to rebuild the front door which his father broke down in a drunken rage, gazes into an empty refrigerator and tries to make some sense of it all. That refrigerator, by the way, is a famous icon of this play. At some point almost everybody stares longingly into its vacant recesses.

Written in the ‘70s, the play is more than a little autobiographical and links with Shepard’s other rural tragic-comedies, “True West” and “Buried Child.” It also hammers home its symbolism: sacrificial lambs, empty refrigerators, inedible food and broken down cars, doors and lives. With all of this, it is very funny. Shepard’s dialogue is sharp and the ACT ensemble cuts right through it. Willis is magnificent as the father, whether in a drunken rage or a brief reformation that has him folding the laundry and frying eggs. Reed, who played the daughter in the original 1977 production, gives the erratically parenting mother a nice narcissistic spin. Lawrence’s daughter rings true – a frustrated teen in the throes of her first menstrual period (another kind of “curse”). But for me, the key performance is Williford’s. Desperately trying to connect with his father, alternately protective and at odds with his sister, despairing of bringing his mother back down to earth, he is a haunting, brooding presence, not unlike the very young John Malkovich who took the role with a very young Steppenwolf Ensemble when I first saw the piece back in Chicago.