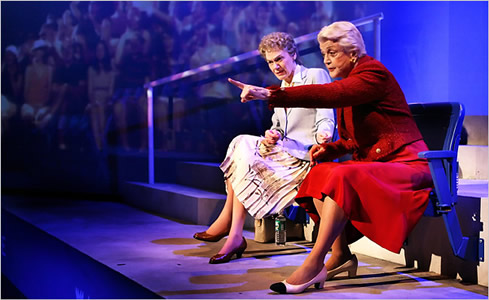 Terence McNally’s play, Deuce, is set during a tennis match at Forest Hills stadium. The audience sees it at first from the perspective of a newscaster who singles out two former womens’ doubles champions among the spectators, Midge Barker (Marian Seldes) and Leona Mullen (Angela Lansbury) reunited by the tournament. The remainder of the play consists in their chat: polite, cordial, charming. If they ever felt competitive, it left no after effect on their personalities. Given the way of things and human nature, they might have revealed high energy, or passion or even enmity, in a word, more of the desire and power it takes to become first rank anything. Their niceness is a handicap that costs the play any potential snap, crackle and bite.

Well, yes, they have been out of the game for thirty years, plenty of time to mellow. Still, their backward glances, “do you remember…” border almost on the ‘historical impersonal’ and finally beggar belief: everybody has a body or two buried in the back garden. They agree that what mattered most was not their commitment, or even the game, but “winning.” The line is not credible. Winning must have involved conviction, love, hate, fear. These lovely women instead show patience, intelligence, and mutual respect. They have no hidden vices, cover up no crimes and rivalries, unless you count Midge Barker’s a brief reference to a lover whom Leona Mullen finally married. The revelation goes by quickly, uneventfully; no dramatic capital spent on it.

The performances by these Tony award winning actors never veers from perfect.

The play’s odd note, and source of gentle humor, derives from its historical moment before feminism. They are surprised and a bit dismayed to discover themselves feminist political icons; “who, me?” What would such a stance call for, they want to know. ‘I have nothing to do with anything like that,’ they agree. The issue is more than theoretical since Midge Barker comes prepared with a speech that in this regard seems to have ignored the obvious. Is that the playwright’s point? That the women’s generation remained politically oblivious? Essentially, sweetly irrelevant. And or that at their level of accomplishment tennis, perhaps any sport, moves in its own orbit? The issue, however, remains open ended since Midge never delivers her talk, and just as well. Her brief rehearsal, before her partner stops her, unintentionally satirizes the “officialese” of radio announcers and other public speakers. Women, champions or not, imitated the style of their men The women do take their moment in the spotlight, standing, smiling, getting into uniform jackets and waving at fans.

Ms. Lansbury returns to the stage after a stellar career in film and television. Ms. Seldes’ many memorable roles include an appearance in Terence McNally’s “Dedication, or the Stuff of Dreams.”