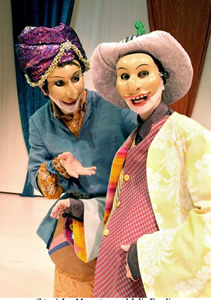 From humble keeper of the town square, Fafalois rocketed to fortune and responsibility with its attendant potential of danger. A worn and ancient text called “Succession” specifies that when all possible relatives of the king are gone, to the lowly sweeper goes the crown. That time has come, as it can in myths, fairy tales, or opera, and the Ziggurat Theatre Ensemble is up to the task of creating a delightful rendition: charming drama mixed with dance and embellished with masks, magic, fanciful costumes, and even a dragon – more commedia dell’arte than anything else.

The barren stage is the central square of the fictional country of Galliandra. As befits a kingdom with only one public square everyone seems to pass through it. Everyone means six actors, playing the parts of eighteen people and giant puppets, who are three ghostly elders. Fafalo, Jon Monastero, sweeps and sweeps, and engages in a bit of unlawful trade on the side, until the discovery that he is to be king. Linga, Anna Heinl, looking and moving very much like Snow White, is the puzzle girl, trapped in her lowly caste and hopelessly in love with Yungio, the wise man, David Valdez, alas of a higher caste and therefore unattainable.

Of Falstaff proportion, John Achorn is both Bogezmo the chief attendant to and director of, the king, and Banjawi, the villain who is out to destroy Galliandra in semi-samurai attire. His quest is for the magic tile of Ulwa which he is convinced is hidden in the royal coffers of Galliandra. When Yungio produces the book of Succession, making Fafalo king, everyone’s world is turned upside down.

The ensemble makes Stephen Legawiec’s creation float like child’s play. But it is not. Despite being masked throughout, the players are very expressive. Their movements are well choreographed by elfin Li-Ann Lim who plays and dances six characters herself! It looks like a romp, but the combination of masks, movement, and story would be easily ruined by less meticulous direction.

Legawiec is fascinated with the power of myth through the ages. Perhaps the character Yungio is a reference to the archetypial myth theories of Carl Jung. The sacred motto of the Greeks, “Fortune intervenes” is invoked at the beginning, however, Galliandra’s motto is sheer nonsense. A little nonsense, well played, Fafalo is entertaining, but may not be to everyone’s taste.

Masks, by celebrated Balinese mask maker, Nyoman Setiawan, and imaginative costumes, by Suzanne Scott, set an otherworld playful tone that the actors pick up before any official action begins. I generally dislike any form of audience participation, however the players of Ziggurat use it sparingly; they are engaging and the mood is appropriate, never offensive.

While no adult will have his intelligence insulted by Fafalo, it is probably best viewed with a sophisticated child seated next to you, the under six set is best left at home; the unreal becomes too real and it is frightening to them. Several very scared little people were in their mother’s laps with arms tightly around mom’s neck. Peppered with puns and humor that many children will probably not get, but parents will enjoy, Fafalo is something the whole family can appreciate. All the good guys get to live happily ever after.