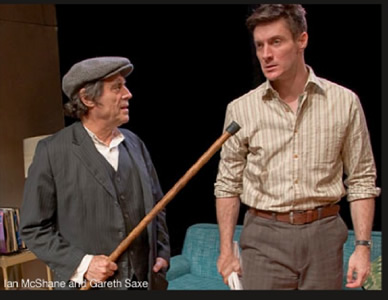 Harold Pinter’s “Homecoming” has been playing to full houses since December ‘07. This tightly paced, provocative revival directed superbly by Daniel Sullivan, causes its audiences more than a little anxiety. In 1965, the original evoked a mixture of high praise and vituperation by critics for its cool, nay, sardonic view of family. Once, long ago that nearly sacrosanct topic pivoted on a bustling Mom and dim Dad, types who still reappear on some television sitcoms. On Pinter’s stage, mom and dad metamorphosed into one foul-mouthed, snarling ex-butcher in his sixties called Max, who rules a household by insult, diatribe and bullying. His brother Sam, a chauffeur also in his sixties, seems almost too gentle by comparison. Of Max’s two sons, he seems to prefer the muscle bound Joey, “in demolition” by day and unconscious of a double meaning, otherwise in training to become a boxer and strike it rich. The elder son, Lenny, is a flippant, natty type who runs women “on the game.” So, one roustabout, one pimp.

Into this model of dysfunction appears a third son Ted, returning from America to visit the nest with his wife, cool, long-legged Ruth. The household’s responses to her presence form the action, basically a series of power plays that brings each in turn to an unexpected crisis. Not to suggest emotional explosions here; Pinter’s territory lies precisely opposite to any expression of affect. Theme and style of the whole remain spare, flat, uninflected yet managing to express a rancid attitude toward the world and each other.

Director Sullivan captures this, as well as their motiveless aggression, by a rigorous application of stillness and silence. A line is spoken, surrounded by a pause; another spoken, followed by another pause; this may lengthen; others on stage may stand in “freeze frame” until they speak; one voice at a time, often to repeat the other’s word or phrase, always unemotional no matter its content. Dialogue sidles away from conversation; words cannot be exchanged here in an easy give and take since their meanings cannot be trusted. When the men can be bothered to speak at all. Speech is not their mode of communication. These strategies, now long since recognizable as Pinteresque, altogether arouse anxiety on and off stage: nothing is explained; uncertainty reigns.

Except about a sexual principle that requires no words. Ruth crosses her elegant legs and waits for the men to pick up the cue. Ted waits for her, hat in hand, unexpectedly ready to leave, his gesture almost expressing disapproval or at least discomfort; while she accepts the athletic embraces of Joey and the scalding gaze, call it intense scrutiny, of Lenny the professional voyeur. He straddles the couple for a closer view of their faces after they, in a long, tight kiss, roll from the couch to the floor. This bit of action tells all.

Collectively and individually they are so unlovely we almost do not mind not understanding their every line. There’s no mistaking the men’s leering and salivating; they will take Ruth as their own, literally, share her, all for one. They’ll even “put her on the game” as the snide Lenny suggests, so she can pay her own way, while giving them three or four hours an evening. They wonder if she “gets it.” She does. Ted seems to mind a bit. He intended only a brief a stop-over on his way back to his college teaching, not this redefinition of his marriage. “Don’t be a stranger,” Ruth calls to him from her chair surrounded by the men while he gets his luggage out the front door.

The hilarity reportedly aroused when “Homecoming” first appeared was paired with a twitch of discomfort, even of distaste by some critics. Their views had no effect on the committee awarding the Nobel prize for literature to Harold Pinter in 2005. This revival, however, might ask why current Broadway audiences are responding to the play and how so when dialect alone erects a tall barrier to easy appreciation. At base, “Homecoming” is more of a send-up than a satire (which always means to expose and so correct a malaise); at times the play comes closer to travesty than parody of family. The subject has ruled since drama began, back with Aeschylus and the House of Atreus. In the mid twentieth century, engagement with family by major playwrights (say, Williams, Miller, O’Neil, Pinter) calls for the free form of comedy: essentially, everything that is not high tragedy. Comedy always invites byplay on gender, so here “mother Max” as a portly slob whose boys, in his language, range from “git” to thug, all snarling and sniping at each other.

As a metaphor, family works as well as the literal, nasty level of reality expressed here where sexual rivalry is eliminated. That’s part of the humor implicit, as I take it, in the reigning principle of sharing Ruth. Men after all are divisive by nature, whereas she is primary: mother, wife, whore. But this is a small part of what might shock audiences, though biology keeps it current. It is Pinter’s dialogue, flat and taunting, that lethal attitude, that thrust and parry in which they all “up the talking game,” jostling for the last word without stalling over their competition. Malevolence lurks just under the lines, which, as inferred, are too minimal to register or collect as talk. Little accrues. Most of the time they speak in short bursts; ask no questions, use grunts judiciously.

The exceptions are remarkable for their concision. Lenny reveals himself as a brute when he has a go at Ruth late at night with a spiel about a woman who made him a “certain proposal.” He might have “killed her” had he not anticipated “bother” to cope with a corpse, so he just “gave her another belt in the nose and a couple of turns off the boot” and “left it at that.” His viciousness is reflexive, for he meant to be flirtatious. For him, however, sexuality calls up violence and suggests he is impotent.

Max, the other talker, played marvelously by Ian McShane holds forth as his patriarchal right in this prodigious role. He is “on” and banging his stick for nearly the length of the play. For him, Ruth’s presence calls up lengthy recollections ( in Act 2) of his wife and family when he was young. He is not old, he protests near the end in a long wail fretting that he will be denied. his share of Ruth Ms. Best as Ruth is merely marvelous. A slight movement of her bared knee generates more sexual tension than is expressible in any other language. But all the acting was stunning, especially as style was the thing, as already implied, calling for acute physical attitudes and tightly controlled poses.

The work as a whole needed one more ounce of power, what else to call it, that sock in the belly that takes your breathe away, in order to live up to its status as a masterpiece. Perhaps it was right there on another night; performances vary, as is well known, for mysterious reasons. And audiences differ widely. The set, the cross section of a dingy row house just outside London, had that brownish buff color of all working class houses. Even the seedy sofa and chairs in the main room resembled that worn out color, the perfect contrast to the men all turned out in coat and tie to smoke their after dinner cigars. The image was particularly apt since the back wall held a huge

hole in the plaster, perhaps a sign of the future.