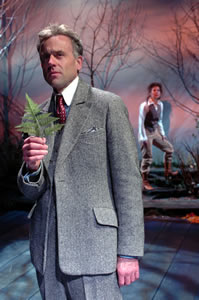 “Ice Glen,” running through Dec. 10 at Aurora Theatre in Berkeley, is a bagatelle, a brush of a butterfly wing, a brief haiku that is pretty but has little meaning. The descriptions are apt; as Joan Ackermann’s pleasant little play strives to combine the worlds of society, nature and art. It is what it is and it’s not fair to skewer it because it’s not “King Lear.” Nevertheless, in spite of the efforts of an excellent cast, there’s not a lot of “there” there. As a romantic comedy, it’s a bit short on the romance and not terribly funny. Just kind of nice.

The year is 1919, a time before Depression and devastating world wars when manners still mattered and poetry was a valued commodity. In an old house in the Berkshires live a widow, Mrs. Bainbridge (lovely Lauren Grace who brings a glow to every part she plays), a young poet (Zehra Berkman, who stomps around the grounds wearing muddy boots and a perpetual scowl), a not-too-bright but highly enthusiastic orphan lad (Douglas B. Giorgis) and two long-time servants who are the best of the bunch. Played by the formidable Julian Lopez-Morillas and Jessica Powell, Grayson and Mrs. Roswell keep the household (and the audience) together with a firm hand, folksy wisdom, understanding and a good deal of heart. All while keeping the proper distance, peeling potatoes and dealing with the leak in the roof.

Into their sedate and secluded lives wanders an editor from “The Atlantic Monthly.” He is after Sarah Harding’s poems and, after a time, the poet herself, although he stops along the way for a brief dalliance with the lady of the house. Marvin C. Greene is very good indeed as the well-meaning Mr. Woodburn, a widower as isolated in his own way as the country-dwellers are in theirs. Sarah is determined to withhold her poems as she withholds herself. They are a private matter although Woodburn maintains they are works of genius that should be shared with the outside world. The scenes between them are the most tense in the play and involve the most scowling on the part of Berkman.

Oh and there also is an offstage bear, beloved of Sarah and the boy, who stands for something as well. Is the bear the flip side of nature, menacing and predatory? Or is the bear the spirit of the fun-loving and philanthropic Mr. Bainbridge, dead for some three years, leaving the household in genteel poverty and with memories of happier times? Who knows? Who cares? Sometimes a cigar is just a cigar and a bear just a bear.

Aurora founder Barbara Oliver has directed the cast with a sure hand and the set, by John Iacovelli, is a miracle of sylvan backdrop and manor house chic, although there is much distracting to-and-fro as the cast members move the furniture in, out and around between scenes.

In the heart of the woods there is a remote glen where water stays frozen all year ‘round. Yet, when you touch the ice, it is warm in your hand. This seems to be the central metaphor from which the play takes its name. Within a person there may be a core of ice that no sunshine can melt. Yet, if you are daring enough to seek it out and touch, it will be warm in response. Nice, but not quite enough.