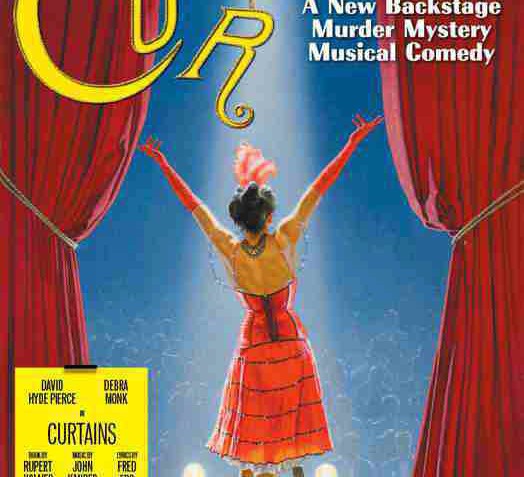 Remember, in the 50&#146;s and 60&#146;s, coming out of the theater after seeing a musical, with dancing feet and tunes already committed to memory? And what about feeling oh so sexy with cinched waists on either full skirted or hourglass dresses? Well, John Kander and the late Fred Ebbs have brought back those memories in their last musical, Curtains. Don&#146;t remember those things? Curtains will probably still be engaging, but maybe the temptation will be to view it a bit more critically. What a pity it would be to whip out the microscope and nit pick away.

The story is of a really weak musical, &#147;Robinhood of the Old West,&#148; opening in Boston before a Broadway run.It is fraught with script problems, production problems and a star who only has fading name power going for her. She collapses at the curtain for the first performance. It turns out to be the first of a string of mysterious deaths plaguing the production as they try to rewrite, re-cast and perform other desperate acts to get the turkey into shape for a return of the Boston Globe critic who has pronounced &#147;Robinhood&#148; dead on arrival. They become enveloped in an old fashioned whodunit complete with a detective, Lieutenant Cioffi (David Hyde Pierce) with theatrical aspirations.

That&#146;s right, Curtains is another play within a play � la The Producers or The Drowsy Chaperone, the latter of which also premiered at the Ahmanson this season. The structure is hardly innovative, but what makes it work so well is that the players on the Ahmanson stage &#150; except the original lead &#150; are supposed to be first rate performers, and they are. &#147;Robinhood,&#148; the play within the play, is just a mediocre vehicle.

One number they are doing is called "Kansas" and, yes, it does sounds a lot like Oklahoma with choreography that owes more than a little to Agnes DeMille and music that smacks of Rogers and Hammerstein.There is even an aside, &#147;If you love Oklahoma stay there.&#148; Of course it is supposed to remind one of Oklahoma, and it is brisk and entertaining. In fact, the problem, if indeed there is one, is that Curtains smacks of something familiar.Almost Pajama Game here, Chicago and Cabaret (both Kander and Ebbs collaborations) there, maybe an echo of Sondheim, too, but if memories and associations are conjured up they are very pleasant ones.Curtains has none of the contemporary punch of Urinetown, and no one was heard humming any melody on the way out, but the most frequently overheard word from the exiting audience was &#147;fun.&#148;

In addition to the frantic, back-biting world of the stage, fun is what Curtains is about. Rob Ashford&#146;s choreography is high-kicking and spirited and the cast seems to be having a great time with the old-fashioned, Broadway style dancing.Outstanding were the lithesome Jill Paice and the acrobatic dancing of Megan Sekora (Bambi). Even Deborah Monk, the matronly producer of the flop, and mother of Bambi, was a delight to watch as she belted out song after song. Isn&#146;t that reminiscent of Ethel Merman? And, wasn&#146;t she fun to watch?

Curtains is corny; it is silly; it is supposed to be that way: a simple pleasure like a hot fudge sundae or a Three Musketeers bar. Not for everyday, but a treat when one allows oneself.