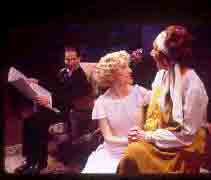 The Pearl Theatre Company has earned a well-deserved reputation for excellence in the presentation of both classical theatre and traditional American plays. Given their strengths, George Kelly’s family comedy from the 1920s is a natural choice to add to their repertoire. It’s a deceptively simple work, starting out as a mildly witty play about a family with a few eccentricities and a few secrets, but it soon becomes more than that. The title character is a friend of one of the young nieces of the family, an outsider who challenges the assumptions of the family, and upsets the balance that they have sought to maintain over the years.

Pamella Pearl (her last name coincidentally the same as the company) plays this benign interloper with a delightfully subtle combination of comic aplomb and sensitive depth. The character is a fascinating blend of devil-may-care elan and down-to-earth sensibleness, a truly American character, and Pearl’s performance navigates the line between the two elements of character with shrewd skill. Voice and action combine in a flawless performance. She makes it entertainingly clear that Daisy Mayme sees through the family phonies, endears herself to the more aware members of the clan, and brings bright warm light to a household that is under some pressure to live in the dim hues of conformity. She even melts the heart of the rock-solid businessman who is the patriarch of the family with what might be called sexy logic. It is an altogether winning performance.

Pearl is supported by a cast that breathes vibrant life into all the other characters. Under the artistic leadership of Shepard Sobel, they are a real company, with the same actors and directors working together over and over, and this ensemble method creates over time a trust and almost intuitive unity. Dominic Cuskern, as the sensible man of affairs (business affairs, that is), brings dimension and crisp strength to a character that, in the hands of a lesser actor, could be a stereotype. Robert Hock, as a dotty but wise 91 year-old neighbor plays a short scene of comic brilliance, leaving the audience hoping that he will return.

The play is directed by Russell Treyz, one of New York’s most skillful and perceptive directors. He clearly loves the script and the characters and he has guided his actors to share this love. The movement he has created is smooth and telling, and the character’s voices play with and against each other to support the story’s ins and outs and the characters’ ups and downs.

One of the most fascinating elements of the production is the set (Beowulf Boritt) which is the warmly woody interior of the living room of the old family house. On the walls are large paintings depicting what the house and surrounding road and trees look like from the outside, a brilliant way to realize the entire world of the play. The costumes by Rebecca Morrison are character-perfect and period-perfect.