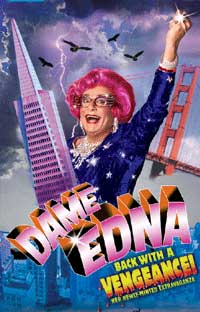 Dame Edna Everage and the Rise of Western Civilisation

It’s surprising, considering her vast ingenuity (no, that is not a body part) and super-honed skills of self-promotion that Dame Edna Everage has not been heralding her Golden Anniversary, which comes up next year. Created in 1955 as a mere housewife by actor/painter/early-Renaissance man, Barry Humphries, ordinary Edna soared into international celebrity two decades later, picking up her knighthood along the way, not to speak of resurrecting the world reputation of her native Australia, previously seen as a mere destination of deportation for convicts and compulsive punsters.

Which is not to say that the good Dame has risen above the art of punning, or for that matter, sly (and not so sly) innuendo, body part jokes, aging jokes, and–the great contribution of the British Empire to world humor–toilet jokes. At the center of it all is the drag persona, a man attired in women’s clothing meant to evoke the execrable taste of the middle classes, the upwardly mobile who haven’t yet learned the difference between Zale’s and Harry Winston, Mervyn’s and Barney’s NY, The Gap and Gucci. Add the 1950’s retro cat’s-eye glasses (rhinestoned, of course) and enough sequins and spangles to blind her entire home town of Melbourne and the comic mood is deftly set. It’s classic music hall schtick.

Class differences, a second major British interest, are a constant presence in her humor. Early on she establishes the balcony audience as the unmoneyed and later in the show plays to that original set up with a few well-placed zingers. Or she questions a member of the audience or two about the decor of their guest bathrooms, playing on the snobbishness inherent in marble vs. travertine vs.tile or the thread counts of towels. (This bit actually cleverly combines the class theme with the bathroom fixation. The lady is consistent.)

But her great specialty, the backbone of her show, is Dame Edna’s comedy of insult. She’s a Don Rickles with rounded edges. Where Rickles attacks and pounds mercilessly on his victims, the Dame first seduces with a kindly tone, an air of generosity. Then she slips in the knife gently and twists it just enough to squeeze the humor out of the put-down. "I don’t pick on them," she protests, "I empower them. I use a little bit of tough love." "Possums," she affectionately addresses her audience.

Dame Edna is well-informed and quick on the draw. Talking to an audience member who turns out to be Norwegian, she mentions having a new painting from Norway–straight from the recent newspaper headlines and spontaneously very funny. Of course some "spontaneity" in this sort of comedy is the result of careful preparation and the cleverness to use it when the opportunity arises. Local aides have carefully prepped her on the current scene, so she can lightly drop in a reference to Gavin Newsom and Kimberly Guilfoyle posed reclining on Ann Getty’s sitting room floor for a magazine photo spread. Preparation, a nearly impeccable sense of comic timing, years of experience and a natural wit come together as if it all were the easiest thing in the world.

She uses her family members as subjects the way Phyllis Diller used her husband, Fang. ("I decided years ago to put my family last.") Her late husband, Norm, becomes the initial source of more prostate jokes than have ever before graced a stage in one evening ("My husband’s prostate has nothing to do with you, Madge, so keep your nose out of it.") Her "homeopath" son, Kenny (His partner "was an altar boy. At one point he toyed with the priesthood."), and her daughter, a lesbian living on the "fringe of Fresno."

There are a few quite ho-hum musical numbers with a dancing/singing contingent of four and a couple of set-ups with audience members participating on stage–a script reading, a cooking scene–that bog down pretty quickly. The latter also slipped badly with a mixture of food and potty jokes. A young couple (she very pregnant) brought up on stage for a telephoning gimmick worked better. Even though they couldn’t get a connection, Dame Edna kept the laughs coming.

Rest assured, even the most sophisticated in the audience cannot sit though her performance without laughing often and well. That’s a great gift in a world in which laughter has become short in supply and, all too often lately, despair seems to rule the roost.