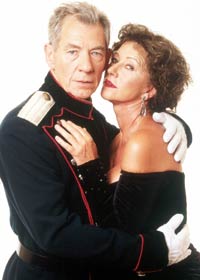 On a rocky, end-of-the-world island off the coast of Sweden, with angry waves crashing endlessly, maddeningly just outside the off-kilter tower of a former prison, a man and a woman are at home, driving each other absolutely crazy. The play is Strindberg’s Dance of Death, starring Helen Mirren and Sir Ian McKellen.

Early in the proceedings it is established that these two characters, man and wife, have not only created their own personal hells, but have created their own language, their own way of telling the truth–that is to lie over and over again, creatively, outrageously, credibly, viciously, painfully: little white lies and big black lies, but lies, lies, lies. It is their code for communication with each other as the periodic interruptions of a Morse code clicker is their way of communicating with the outside world. From that outside world comes a character from their past, the wife’s cousin who can-or cannot-assume the responsibility (or the blame, as the couple would have it) for helping to birth their relationship many years before. He does not know the code. He serves as a buffer, a foil, a straight-man to their dark humor: he believes one lie, then another, then a third, a fourth, each contradicting the one before, his loyalties shifting between these two married ogres whose lies are whips, bludgeons, blades, crushing embraces. At one point he rushes off muttering, screaming, stumbling, gesturing madly, trying to escape the force field of their malevolent mendacity.

The one truth seems to be that they hate each other–or do they? Their mutual hatred, as with everything else in the play, is not a simple thing. She seems passionately to wish his death, and he seems several times to be right on the verge of obliging her. He seems absolutely and aggressively bored with her, with the over and over and over of the marital encounter, verbal and otherwise, that has become the air he breathes, the ground he walks on. And yet he seems so totally to have interwoven his psyche with hers that he could not survive without her. To anyone who has ever been married–or been anything like married–this will seem wholly believable.

Dance of Death, written in 1900, is echoed vividly in so much of modern drama. These two sound just like Didi and Gogo much of the time; they fight like George and Martha. The play has the emotional and psychological complexity that every serious playwright strives for today and it deploys language in a way lesser playwrights can only covet and emulate. To the credit of Richard Greenberg, who adapted the play, the language and the ideas seem fresh and newly spoken.

And the actors? McKellen and Mirren play the embattled couple with tooth-and-claw passion and vivid theatricality. They inhabit their tilting tower on the edge of the angry sea with caged-tiger power, passing verbal peril back and forth like mad jugglers tossing a wicked blade, capable of dealing death blows to each others’ psyches.

Another fine actor, David Strathairn, plays Kurt, the wife’s cousin. It is one of the more difficult roles in modern theatre, complex and clueless at the same time, and Strathairn carries it off splendidly. At the end of the play the cousin has been chased away and the couple seems almost mellow and loving, but are they softening toward each other, or merely exhausted? Will tomorrow be a new day or, more likely, this day all over again?

Ibsen’s Hedda Gabler and Dance of Death, both from Scandinavian playwrights and written within a decade of one another, are thematically similar as well: two married couples locked in smothering, lacerating embraces. It is said that Ibsen kept a portrait of Strindberg over his desk: "I cannot write a line," he said, "without that madman…staring down at me with those mad eyes."