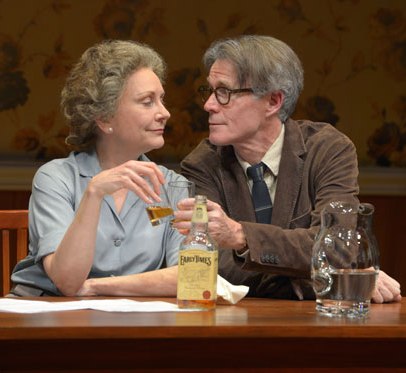 Unlike dogs, all writers surely do not go to heaven. However, if such a place there be, it’s nice to imagine that poets Elizabeth Bishop and Robert Lowell will get together there and have an epic love affair, something that never actually happened in real life.

Hmm, a two-person play about correspondence? Sounds a lot like “Love Letters,” the widely-traveled vehicle of some years ago, famed for its rotating cast of stars. Not really. First of all, the letters here are highly literate, like their writers, and more about poetry than romance. Lots of names are dropped. Hemingway, Marianne Moore, William Carlos Williams, Flannery O’Conner (what, no Eliot?) all get a mention or two. The two friends keep meaning to meet up but something usually gets in the way. She is a serious drinker, afflicted with asthma and incurable wanderlust. Her travels eventually land her in Brazil with who we assume is a same-sex lover, Lota. He is afflicted with bipolar disease and often lands in a hospital or in depressed isolation. His manic phases are absolutely terrifying. He also manages to acquire (and shed) some three wives and a couple of kids along the way.

And still they write. They send each other literary gossip, thoughts and their poems and, in one of the play’s running gags, she invariably finds something to correct in his. At one point Lowell comes very close to proposing to his best friend but chickens out and, the next thing we see is him waltzing down the aisle with somebody else. Between acts they visibly age. It’s not a bit static, although there are times when the two writers sit side-by-side at a desk to pen their missives, which come raining down on them at the very end. They also climb ladders, roll in a pet toucan (hers), fall on the floor (him) and slosh their way through an actual rainstorm, courtesy of set designer Annie Smart.

This probably is not Ruhl’s best play, but it is warm and sweet and funny and, in the end, quite moving. The two actors utterly inhabit their roles; Nelis is rumpled and all over the place, while Fisher is cool and more than a little withdrawn. They seem to spend their lives longing to be together while doing their best to stay apart. A fine romance? Maybe it was the only one they could have had.