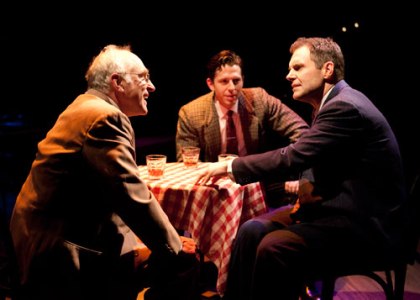 Left to right: Jeffrey DeMunn, Tyler Pierce and Lucas Caleb Rooney in “Death of a Salesman”
Photo by Henry DiRocco

Death of a Salesman

To say that “Death of a Salesman” is a staple of American theater is an understatement. The 1949 play, written by the iconic Arthur Miller, is a masterpiece, one that will be remembered and still studied a few hundred years from now. It addresses the fundamental struggles of the average modern man, splitting his psyche open and revealing society’s dreams and fears in a continuous battle.

Meet Willy Loman, a 60-year-old traveling salesman who, to say the least, finds business trips increasingly difficult. He needs to stay employed to support his family, but his sanity is compromised by a lifelong dedication to failed dreams and unrealistic expectations. His wife Linda is crippled by her loyalty to the old man and hopes her sons, Happy and Biff, will help ease the father’s downward mental whirlwind. Happy is a salesman himself, a successful one, or so he says. He has understood that the only way to help Willy is to cater to his illusions. Biff, on the other hand, has been working on out-of-state farms for meager salaries for many years. Each time he comes home from a failed job experience, Willy’s turmoil worsens. We learn that, as a boy, Biff held great promise, but a family secret has shattered his potential and at age 34, he epitomizes his father’s fears.

This Old Globe “Classics Up Close” production is skillfully directed by Obie and Lilly Award winner Pam MacKinnon. She has surrounded herself with a very talented artistic team and a first-class cast. Marion Williams, who has worked with MacKinnon in the past, has designed a very transparent set that lets us scrutinize the core of the Loman family. She has had to convert Miller’s extensive original proscenium setting into intimate in-the-round scenery. She was very successful in this endeavor. Williams’ set is very versatile and allows the audience to travel easily through the home, the dreams, the flashbacks and the agonies of the salesman. The 1940s costumes were designed by Mathew J. LeFebvre, lights by Rui Rita and sound by Jeremy J. Lee.

The amazing Jeffrey DeMunn is the infamous salesman. DeMunn, who has been seen in many television series, movies and Broadway productions, delivers an utterly astounding performance. We never doubt for a second that the real Willy Loman, the one who came straight out from Miller’s imagination, is there before us. Another great show of talent on stage is by Lucas Caleb Rooney, who plays Loman’s son, Biff. The accomplished actor, an MFA graduate from the Old Globe/USD Theatre Program, depicts a wonderfully complex and misfit character. Robin Moseley also stands out as Willy’s wife, Linda, and Tyler Pierce is second-born son, Happy. Together, these four gifted artists paint a very powerful emotional portrait of the Loman family. John Procaccino most effectively portrays neighbor Charley, Adrian Sparks is Uncle Ben and Jordan Baker is “The Woman.” The rest of the skilled cast includes Deborah Radloff as Jenny and Letta, Ryman Sneed as Miss Forsythe, Jonathan Spivey as Howard Wagner, Ben Diskant as Bernard and Jesse Jensen as Stanley.

“Death of a Salesman” is a commanding drama. Out of the tragedy emerges a tale of hope. While the main characters are pressured by the world’s expectations and drown in a sea of social and economic demands, a single young man, Biff, finds himself. His consciousness rises out of witnessing his family’s demise. “I know who I am, kid,” he declares, and that is more than most of us in this modern world can claim.