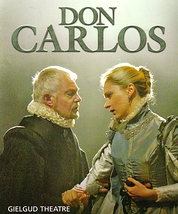 Our reviews of the Verdi opera based on the play:

Michael Grandage&#146;s revival of Schiller&#146;s rarely seen political thriller transfers from the Crucible Theatre, Sheffield and scorches the West End stage with its electric intensity. A magnetic Derek Jacobi (as King Philip II of Spain) leads a uniformly excellent cast in a fast paced and passionately spoken production which gives the audience a riveting experience of historical high drama. They are well served by Michael Poulton&#146;s new translation which is at once romantically lyrical and sardonically witty.

Friedrich Schiller (1759-1805) is best known for his Ode to Joy set to music by Beethoven in his Ninth Symphony, but he was a poetic historical dramatist whose epics mix political intrigue with thwarted romantic passion and the evils of tyranny which he had witnessed first hand. Don Carlos (1787) is no exception. Set in 16th century Spain, Don Carlos is obsessively in love with Elizabeth of Valois, to whom he was once betrothed and whom Carlos&#146; tyrannical father, King Philip, has married himself instead. Estranged from his distant and cold parent, Carlos&#146; enlists his oldest friend, the idealistic Marquis de Posa to act as go-between. Posa sees his chance to convert Carlos and Elizabeth&#146;s youthful passion into full scale rebellion against his father&#146;s tyrannical regime.

Grandage&#146;s production emphasizes the oppressive atmosphere of the Spanish court and its conventions, within which the characters (including the King) are trapped and unable to be free to be themselves. It is also a court of spies and intrigue, plots and counterplots, letters hurriedly passed from hand to hand where everyone is being watched and no one can be trusted. Grandage clearly points the rapid twists and turns of political action and the power of the Roman Catholic Church under whose fearsome shadow the Court exists, as represented by the Grand Inquisitor (in a truly frightening performance by Peter Eyre).

Grandage is well served by Christopher Oram&#146;s flexible permanent set with its heavy central doors and high windows with iron grilles powerfully re-creating the claustrophobia of the court. Moreover, Paule Constable&#146;s lighting is a standout and a character within the drama itself, perfectly heightening the mood of each episode in the play.

In his towering central performance as the King, Jacobi is the chilling embodiment of absolute power. Yet, he also vividly conveys the emptiness and loneliness of the man underneath and his frustrated search for truth and, above all, for peace. His feeling of betrayal at the hands of his wife Elizabeth and Posa, the man he thought he could trust, is devastatingly moving.In his portrayal, he reaches into and presents with utter clarity the soul of King Philip and reveals himself as a great actor at the height of his powers.

As his son, Carlos, Richard Coyle raises the conflicting emotions of the tortured Prince to Hamlet-esque proportions and Elliot Cowan gives an equally passionate performance as his friend the revolutionary idealist Marquis of Posa, trying to maneuver within a stultifying regime. A radiant Claire Price (as Elizabeth) and vivacious Charlotte Randle (as Princess Eboli, the King&#146;s mistress) both clearly convey how, within this society, women&#146;s feelings are sacrificed to political necessity.